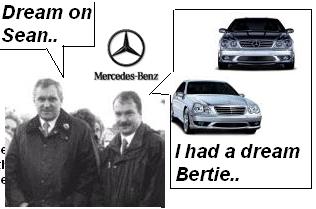 "DAIL Sketch has always dreamed of headlines like 'Cowen in cocaine shocker!'. You can therefore only imagine our delight. Joe Higgins asked if anyone was outraged by FF's willingness to receive large donations from builders who rob their workers' pension funds; Brian Cowen's indignant response provoked the socialist into a query as to whether he had been indulging in the white powder.

Apparently Mr Cowen was more outraged by the call for outrage than the robbery of the workers. Eamonn de Valera would be impressed by this fine display of Republican Socialism FF style.

The blue-collar brickies were swiftly forgotten. Instead the outrageous treatment of poor Sean Beal Bocht Haughey by Bertie dominated the hearts and smirks of the deppities.

Dail Sketch was less than convinced by all the wails for counselling services and help lines. If Caligula once appointed a horse to the Senate, Bertie should be able to have his choice of Junior Ministers. After all, a clever sheep-dog wouldn't be excessively taxed by Noel Treacy's job.

The Sketch was concerned about far more serious issues than the fate of the Kinsealy sparrow. We want to know what the poor commutersof Dublin have done toBertie.

'Calamity' Cullen and Ivor the Little PR Engine were bad enough, but surely we don't deserve Pat 'Hopeless' Gallagher. We were the only column to predict the Cope's triumph. This was only predicated on the view that Bertie uses the junior posts for the silencing of idiots.

Maybe Pat Hopeless's life experience of gutting fish in Donegal has prepared him for the great role of imitating an Italian traffic policeman on O'Connell Street.

Who knows? If he's as successful as he was with the salmon, there won't be a car left in Dublin by 2007.

In the Dail bar some even argued that when it comes to the port tunnel he'll be like a fish, er, in water. Indeed, if Hopeless does venture in there he'd be well within his rights to say, "Begob Bertie, but the new job is the same as the old one."

MEANWHILE the FF back-bench revolt of 'Baby', three deputies and one county councillor (Bertie must be quaking) provided us with the most entertaining revolt since the battle of the Widow McCormack's cabbage patch.

After all it's not as if Sean Beal Bocht Haughey is some peculiar genius experiencing the Irish equivalent of Churchill's 'Wilderness Years'. Like Pat Carey, Sean 'the Sermon' Ardagh and Jim Glennon he is one of a vast amount of pious new harmless FF TDs whose absence from a ministry will not make a whit of difference to the world.

In truth, Bertie's biggest error was his failure to listen to the union of political stenographers who hadn't factored in Bertie's 'avoidance of earache' theory of politics.

After all, if the ward boss has to choose between Mary Wallace's imitation of Violet Elizabeth, and shrieks of 'But you promised', or a few whimpers by nice harmless Sean, who do you think is going to get the nod?

It all got even funnier as we heard that an Beal Bocht had claimed he was thinking about 'a future outside of politics'. What on earth as? A junior clerk in the county council? A bin man?

As Haughey followed this up with the claim that he was "considering" his "position", one TD chortled that the only thing which might unnerve the ward boss would be if he heard Papa Doc Haughey was doing this.

It certainly would be interesting if a gravelly voice had a word with a certain Mr Moriarty: "The blank cheques. Le Coq Hardi? Those Charvet shirts? Oh, Bertie knew all about that."

Ah well, we can but dream, and even this was replaced by a nightmare as Slieveen O Caolain bleated about 'The Naked Politician'.

No, it's all right. Slieveen has no plans to replicate the gunrunner's daughter's fetching imitation of a lap dancer.

Instead Slieveen was concerned about the views in Katie Hannon's book about how the media monitoring unit was being used for "intelligence-gathering purposes". Even Slieveen had the grace to admit this was very close to the pot calling the kettle an Afro-Caribbean country.

Still, as Bertie anxiously claimed there was 'no intelligence' in his Department, at least for once he was uttering the unvarnished truth.

Meanwhile, even as Sean Beal Bocht issued a PS, Bertie I love you codicil, we do have some good news for 'Baby Haughey'.

When Sile departs after the Easter 1916 commemorations an Beal Bocht will get his chance. 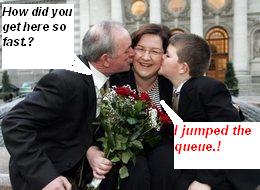