Why you would not use the pages from Bertie Ahernï¿½s new book to wipe your ar*e! 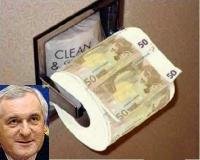 Why you did not buy Bertie Ahernï¿½s new autobiography?

Funny thing happened on my way to Ireland

May 2006.Funny story.
I was travelling from Australia to Dublin via Singapore 3 days ago, and as I sat in the transit departure lounge,awaiting a flight to Amsterdam/Dublin I observed a serious altercation between a big ugly brute of a passport control official,and a quite attractive black woman,(nigerian I believe) well dressed with designer clothes,bags etc.He was scrutinizing her passport with a watchmakers magnifying glass.This went on for about 10, minutes, after which he told her she could not board the flight to Amsterdam,and she would have to get a letter from the irish embassy before continuing her journey.She stood her ground and after another 10 minutes he relented and allowed her to continue her journey.
I met her afterwards and she told me that she had been in China ,where her Irish passport was stolen and the Irish Embassy in Hong Kong had given her a temporary one-hence the scrutiny in the transit lounge in Singapore.Funny thing is she had never actually entered Singapore but the official was trying to force her to remain there to obtain further documentation.ï¿½
I laughed (only to myself of course) at the sight of a coal black Irish passport holder ,on her way from China, having an altercation with a Singapore passport control officer about the validity of herï¿½ documents.
How Ireland has changed.
Time was , (when Charlie Haughey was dishing them out ) ,one had to lodge a few million pounds in the country in some bank account or other-preferably to subsidise the activities of a favoured soldier of destiny.,like Albert Reynolds.ï¿½Now they are a little easier to come by.

Who coined the famous phrase:

Revenue raking in the cash.

I read  today that revenue took in 381 million in taxes and penalties from the single premium insurance bond scam,this year.

Funny,some years ago when I fell foul of Revenue in my own small way,my local bank got wind of my misfortune and sent a posse out post-haste to help me out of the jam.!

A top emissary arrived at my doorstep,one day under the impression that I had a huge stash of "black money" ("Dinero negro",as they call undeclared earnings in Espana) looking for a secure home.This was about the time the Revenue were prising open the bogus non resident account scam.

I listened attentively to the sales pitch in our livingroom,where the friendly gent from the bank chatted to us over a cup of tea.. Iwas informed that I could "lose" any funds I had hidden-or wanted to hide in future- from Revenue, by simply investing in Premium Bonds.These,he explained were sold in denominations of 100,000 old irish pounds each(not for small time tax dodgers!) and had a lifespan of five years.The interest paid on them was a generous 5 % per annum( in hindsight,not a bad deal at all-except for the lurking Revenue inspectors..) and penalties were levied for earlier encashment

I asked him how he would 'lose" my money successfully.He indicated it was all done by sleight of hand, juggling with bank drafts, which it seemed were difficult to trace if laundered well...and apparently Revenue rarely pursued this particular escape route.

I asked him why, given the opening up of the non resident account fraud at the time we were discussing another fraud,- why Revenue would not fall upon this scam at some future date when they were less busy with Ansbacher and non resident accounts  etc.?

He indignantly rejected my thesis, stating that this type of investment involved billions,massive funds (which I could believe,at 100,000 pounds a go) which were shoring up the irish economy,and  furthermore the money was invested with the biggest insurance companies in Ireland and any attempt to interfere,by Revenue,would never be permitted by the government,as it would cause a ruinous outflow of capital,and investment funds,from Ireland to other parts of the globe.

Well I am glad I had no hidden crock of gold. It seems the banks were wrong about this as they were about so many other scams. Ireland is now awash with so much capital at present that an outflow would be doing Bertie a favour.! It's great to see him scoop in so much money,while Mary Hearney gets the blame for it all.! Of course ,it would be even better if they had the competence to spend it all properly..

November 2005:Back in Ireland briefly, for an unhappy occasion,a funeral.Iï¿½ï¿½enjoyed the change of air.My Uncle was very lucky. There are about thirty places in the whole of Dublin in "Hospices for the Dying".These are dedicated palliative care centres funded entirely byï¿½donations from the long suffering,overtaxed public.ï¿½He got one of those places,and passed away peacefully, to an unimaginablyï¿½better world.ï¿½The care is wonderful there,but you have to win the lottery to get in.! Enjoying The lovely bright winter days in the Phoenix Park,but notï¿½ï¿½the incessant rain and oftimes windy days. Variety is the spice of life.I am looking forward to returning tomorrow to Gran Canaria.Temperature there is stillï¿½in the mid thirties.It's a unique place.My Scandanavian tennis mates have E-mailed me,and ï¿½are all arriving next week. A busy time. I hope to lose a little of the beer belly I got from eating copious amounts of deliciousï¿½Lindt choclate( almost freeï¿½in the local factory)ï¿½which I visitedï¿½ in the Pyrenees, in theï¿½south of France,where I holidayedï¿½this summer.

I miss the greenery of Ireland sometimes.The dank smell of the rottingï¿½cornflake leaves of winter in the Park,on a bright crisp clear day. I don't miss the highï¿½prices though.You would have to be robbing banks regularly to pay the electricity,and fuel bills. If it were not for Aldi & Lidl I think the poor and the immigrantsï¿½would starve.! Something sad about the presence ofï¿½ so manyï¿½nationalities,Polish,Chinese,Latvians,you name it,-all trying to earn a weeks wages in a foreign country (and a small one at that).Many of them here on contract,with no " security of tenure"ï¿½and someï¿½some middleman agency who get 20% or more of their salary for nothing except relieving employers of their responsibility to their workforce.ï¿½ Ireland is now ï¿½a Dick Turpin nation. Wheras the government are happily robbing the rest of Europe, of investment with their derisory corporation taxes, -terraced houses in Ranelagh are fetching a million Euros,! and the ordinary people are still hard set to make ends meet.! We are reacing a more two tiered society than our patrons the yanks ever created. There is something surreal about it all.A one bedroom dogbox anywhere near Dublin costs 250,000 Euros +. When will it all grind to a halt.?