You have the power.!

We are told that we get the government we voted for. We are assured by our current Fianna Fail/P.D. Government that we are an educated electorate and that we made the right choice of Government in 2002.

You could be forgiven therefore, for believing that we have a majority Government that is the choice of the people. Strange then to look statistically at the actual reality.

My thanks to the Central Statistics Office for informing us that the total population in 2002 was 3,917,203 persons in the Republic of Ireland.

Of those, over 2.9 million were eligible to vote in the General Election that year. However, only 1,788, 985 actually did so.

We could speculate why the other one point one million voters did not vote at all - we all have our theories.

However, the combined Fianna Fail/P.D. vote of 787,447 votes in that election (to become our present Government), represents only 27% of the will of the eligible voters.

Another way of putting it is that 73% of the electorate did not agree to be governed by the Fianna Fail/P.D. coalition.

It gets even more ridiculous when we consider that the actions taken by this Government today will affect everyone of us in the future. In that light, the coalition reflected the will of only 20% of the total population when it was elected.

Put another way, only one in five people in Ireland agreed.

You have to wonder why the other 3,138,000 citizens of Ireland are happy to be clamped, fined, banned and accept penalty points at the stroke of a ministerial pen.

Why do over three million people who never declared they wanted this Government, accept competing with their fellow citizen for a hospital trolley ? Why do most of us agree to be taxed at source ? 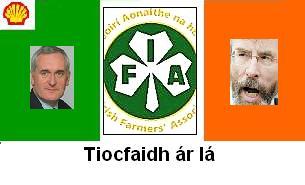 The old regime's day is here-The new regime will be the same, tomorrow and for the next five years,

and it will include Jerry

and his pals-if you dont get out and vote! Mr Cowen appealed to the social partners to act in the best interests of the economy in May 2006.

When Fianna Fáil came to power in 1932, it quickly developed very good working relations with the public service, even though it reduced the salaries of senior civil servants.

When that government called for pay restraint, they got it because they provided real leadership, in marked contrast with our present crowd which has the nerve to call for restraint after it has plundered our treasury themselves.

The current Government has doubled its salaries since coming to power in 1997. Bertie Ahern is one of the highest paid prime ministers in Europe, getting e15,000 annually more than French premier, and more than four-and-a-half times the salary of the Polish prime minister.

We also have the outrageous situation of the Government doing nothing about alcaholic doctor/T.D. Jim McDaid,the uncrowned king of Donegal, who last year collected over 150,000 in Dáil salary and expenses, even though he was hardly seen in the Dáil.

He only voted six times in the whole year, which was less than 5% of the votes taken in the Dáil chamber.

He has openly admitted that he has been concentrating on his medical practice, which earned over 110,000 from medical cards last year.

If a garda tried to engage in that kind of double jobbing, he would be sacked faster than he could say Michael McDowell. The Government is collectively responsible for this outrageous situation, yet it is doing nothing. They are supposed to be our leaders, but the quality of their leadership is a disgrace. In reality they are misleading us; theyre just a selfish shower of lousy gougers.

You dont know what youve got till its gone.!

NOTHING could be more fundamental to democracy than the right to vote, and any government concerned for the preservation of our priceless liberties should be at pains to ensure that citizens have the opportunity to exercise that right.

Many Irish governments have failed the test, usually by leaving it to cash-strapped local councils to keep the electoral register up to date. The result has been the creation of a democratic desert in some constituencies, like the notorious Dublin South East where students in "flatland" might as well assume that they do not possess a vote.

But no previous regime went as far as the present one in plumbing the depths of arrogance, incompetence and farce reached in the current controversy over the register.

The process began sensibly, even laudably. A campaign was set on foot to carry out a badly needed update. An army of officials visited and revisited homes. People who did not respond were taken off the roll. Names were added or deleted on an astonishing scale, by the hundreds of thousands: 500,000 off, 380,000 on.

The extent of the deletions and additions was not the only astonishing aspect. People who had lived in the same place, and featured on the same register, for decades, disappeared from the list. The Labour deputy for Kildare North vanished; his Kildare South colleague appeared at the wrong address.

It did not take long for suspicions to grow. How could Leixlip in Kildare North have an accurate register while that of Celbridge, a very similar town, had one full of errors?

But anomalies like that were a minor matter compared with the scale of the task and the fear that the new register would be worse than the old.

Overwhelmed councils pleaded for time and money with the Environment Minister, Dick Roche. At first he rejected their pleas. Then he performed a U-turn and granted them an extra two weeks.

Not long enough to complete the work properly, but there is a pressing deadline: a general election in six months or so.

To get oneself into a predicament like that shows a sad disregard for democracy. Worse still is that some of the Minister's colleagues seem to regard it as a subject for mirth. They need reminding that rights are indivisible and, once taken away, hard to recover. (Irish Independent)