There is  international  concern that the proliferation of privately owned helicopters  registered by "Friends of Fianna Fail" will lead to disaster. Security sources,here and abroad fear the commandeering of these aircraft could lead to a suicide attack on Sellafield ,or an American aircraft at Shannon,by low level radar avoidance,(explosive packed) helicopter. President Bush has blamed Bertie Ahern and Fianna Fail for this crisis.

In a press conference at the White House,he said, "While we support Bertie Ahern's democratic nation  in which unbridled  capitalism  freely flourishes and ambitious entrepreneurs, wealthy stud farm owners (and so on) are subsidized by bin taxes on the poor and tax reliefs on property construction;the downside is- it giving them  free rein  to set up offshore companies and  raid the public purse with impunity.

Unfettered by weighty encumbrances such as capital gains taxes  they are buying expensive toys such as helicopters.

This may cause  problems for the free world." he commented

"Terrorists are lying in wait for  these opportunities. Hence we are concerned about the growing traffic crisis in Ireland,which Larry Goodman, Jim Mansfield and many other Irish crimi -I mean- capitalists, fly about  the country circumventing toll charges and traffic jams on the M50 and elsewhere, by daily taking to the skies. It represents a very real threat and could put our boys in harms way,even before they arrive on the battlefield-especially our troop air transport convoys,  re-fuelling at Shannon Airport."

Editors note. The list of registered owners of helicopters in Ireland is  of course a 'Who,s Who', of  virtually every villain that every entered the Fianna Fail tent during Galway race week. 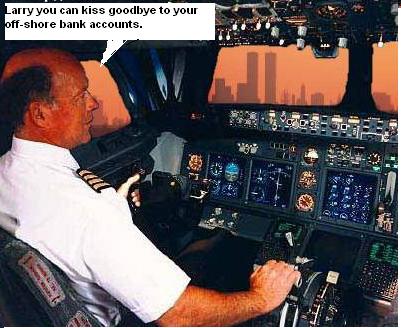 Irelands botched bid to get the United Nations to close the Sellafield nuclear plant was doomed from the outset.

Unsurprisingly, the European Court of Justice found in 2006,that the Government had broken EU law by taking the UN route to harass the Nuclear waste facility.. As a result, five years have been squandered in the battle to close the plant.

Meanwhile, the threat of a nuclear disaster grows as new atomic units are likely there,