An incredible story-now before the legal eagles."Public/private partnership."?its falling apart and the landlord never paid the rent.!! 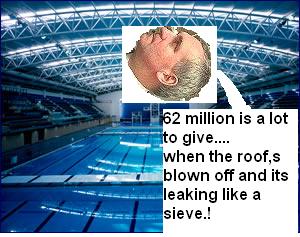 It was Bertie's 'Pet Project': Competence ?

A MAJOR question mark now hangs over the awarding of a major contract for the running of the National Aquatic Centre at Abbotstown to Waterworld UK, a shelf company whose registered address is a solicitors office in London.!

The government invested 62 million in this  public/private partnership project so beloved of Fianna Fail (except when the unions object of course) and the 30 year contract is estimated to be worth nearly 2 million a year in profits. !  (not to taxpayers its not )

Dormant accounts filed by the mysterious Waterworld UK stated it had assets of only £4 sterling in May 2000, two months before the tendering process. The company also did not trade for two years prior to the agreement. Waterworld UK is owned by a comany registered in the British Virgin Islands, Ealing Trading Corp. They in turn have divested the rights to the benefits of the contract to Dublin Waterworld who were registered as a company five months after the tender process began.

Criteria set down for the selection of a company to run the complex, which will house the facilities for the swimming events of the Special Olympics in 2003, clearly state: It is considered essential that the management team of the organisation selected to run the centre has significant experience and a proven track record of managing aquatic centres of similar scale internationally.

It seems that the only experience that Waterworld UK have in this area is that some of those involved run the Tralee Aquadome,( Kerry contracts.!) which is an oversized splash pool in comparison to the new centre. Fianna Fail would have us believe that corruption is a thing of the past. But the awarding of a contract involving massive investment, with the potential to make 60 million profits at today's costs to a company with assets of only £4 sterling with shady origins in an offshore tax haven, stinks of corruption.

This developing scandal is also a consequence of the involvement of private finance in public projects. The National Aquatic Centre could be built by and run by the state.

This would be a disaster of itself.But should the government have withdrawn from its contract with Waterworld UK, and and should an independent public inquiry now be set up to investigate the shady dealings that led to this incredible situation.

It may be just gross incompetence...or it may warrant another 500 million Euros for the awaiting legal eagles to investigate...?

June 2005; A major scandal is unfolding over this topic at present.Seems it was Bertie Ahern's pet project 62 million Euros of taxpayers money spent on a this 'public private partnership', beloved of Fianna Fail.The roof blew off and the whole structure is a disaster. Another 62 million may be spent in salvaging it.! Your money.!

The leader of Finn Gael,Enda Kenny,not renowed for Blairite sharpness, and repartee deserves to be quoted on this one;

He described the centre as "an apt metaphor" for the Government: "massive costs to the public; a so-called state-of-the-art attraction that is all splash, with fake waves, the roof blown off and leaking like a sieve".! Good one Enda

On thing is certain the fiasco will continue to make millions for the legal eagles as the blame is tossed from Billy to Jack for years to come.Guess who will end up paying all the bills ? Correct-you the suffering  taxpayer-as usual.!