We want our money back ,Mary. 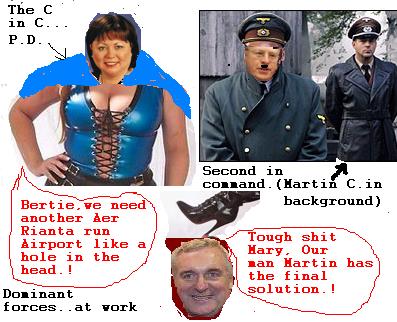 We the people,want our money back.We want an end to stealth taxes.We want accountable and efficient governance.We want Fianna Fail out now.! The bin taxes have doubled.The citizens of Dublin were intimidated. Payback time is next election time.Once every 5 years,only. Make your vote count.!

On this site are listed many more than thirty vignettes of corruption ,incompetence, and arrogance, representing thirty pieces of silver...and betrayal of trust.The kiss of Bertie Ahern is the kiss of Judas.He buys you-and sells you out- with your own money.!

The great "Soldiers of Destiny" only seem great,-because the common people are on their knees with stealth taxes, to fund a wasteful and crony-ridden administration.They have the Unions,the Civil Service,The Gardai Siochana, the semi-state sectors in their pocket,thanks to benchmarking. The numbers game is against the common people.75% of the population will pay the bills during future years.

Our health service is in tatters,(despite almost 40% of the population paying for private health care!), our police force is sadly discredited, our public sector wage bill and pension commitment is reaching ruinous levels.

Our citizens-young and old alike people will pay a heavy price,during the coming years for the mismanagement of this dreadful administration. Their destructive , incestuously self enriching, governmental system must be brought to an end now,-while there is still hope.

Your vote is important.Use it in the coming election.