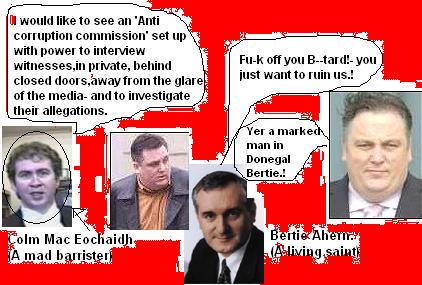 If this were played upon a stage now,I could condemn it as an improbable fiction

I suppose we owe a great debt to the reform minded ,public spirited citizens(members of An Taisce) Michael Smith and Colm Mac Eochaidh who placed an advertisement in the Irish newspapers asking anyone who had knowledge of corruption in public life and the planning process to come forward and reveal their story.

Ironically the only firm of solicitors who were prepared to act as intermediaries in the project were Donnelly & Neary who are comfortably based in Newry-John Bulls part of the Emerald Isle.! The Flood Tribunal followed,in the Republic and is costing hundreds of millions of Euros as the Legal Eagles from the Four Goldmines (Dublins Four Courts )make a gargantuan and expensive meal out of the whole exciting can of worms.

One witness William Gogarty pried the lid open,and the rest is history.They must be rather proud of what they set in train.

Unfortunately ,while the corruption and sleaze associated with our planning process for decades made multi-millionaires of many of the crooks involved- including the now infamously corrupt, former Taoiseach, Charles J.Haughey-the long drawn out denouement made multi- millionaires of another group the legal profession.

Vast sums of money were spent on a somewhat farcical tribunal which ,if our police force had ever been empowered to recruit or employ people with the expertise to do the job-would have been unnecessary.Then again our police chiefs are to this day ,political appointees so how far would that enquiry have gone..

The C.A.B.(Criminal Assets Bureau) was also set up to pursue illegal money across international borders and had some considerable success,so much so that other countries emulated this agency.

The lower classes always fare worse than the white collar fraudsters when the scales of justice are weighed in Ireland-as in most of the unjust world in which we live. When some of the better class villains are ex Dail T.D.s ;former Ministers of State; and even discredited Euro commissioners,they are allowed to keep much of their ill-gotten gains,and rarely endure a criminal prosecution.

On the other hand some hard working,not so lucky villains had their property assets and wealth seized in entirety by the Criminal Assets Bureau.Meanwhile Charles J. Haughey and others are graciously facilitated with a happy settlement which entails a fraction of their ill gotten property sold off to pay the taxmans bill.

Anyone who has ever been learned from the hard school of life and practical experience knows that in this world there are two very distinct and separate Courts of Law for the rich and for the poor,one for the pinstripe-suit fraudster and another for the uneducated working class bowsey,whose background makes him contemptible to the High Priests of every judicial system.

Nevertheless the public were treated to an unprecedented spectacle as the Tribunal Circus performed to packed houses in Dublin Castle,where mostly ,retired old age pensioners were daily entertained by astute legal eagles cross questioning shady and discredited property multi-millionaires, hoodlum politicians,and corrupt planning department public officials who were permitted to strut upon the stage with supreme arrogance and-in some cases- cock their nose at all and sundry.

Some of them gave such cheek that the learned Tribunal judges considered them disrespectful and one of them even spent a few weeks holidaying in private quarters in a comfortable part of Mountjoy Jail.

Many of these players had become so wealthy and above the law, from the entrenched corruption by which they profited that they escaped relatively unscathed-even after the Revenue Commissioners were finished enquiring into their affairs,and reducing their huge asset base by a few million Euros in settlement.

Crime almost always pays of course-and white collar political corruption pays better than most types of criminality.Its almost incarceration proof. Prison sentences are virtually unheard of for respectablecitizens on the take,although 80 year old George Redmond was famously rapped on the knuckles and spent a year in the library section of Dublins most comfortable prison,Wheatfields in Clondalkin.

This was afterwards quashed on a technicality,perhaps he will be compensated by the State?almost everyone else has been

If you value your freedom,only trade legally in cigarettes and alcohol,both of which are large and legal industries worldwide. They are also far more deadly drugs than cannibis.

Selling sex (prostitution)in Ireland,or even taking advertisements in a magazine for similiar services,is by far the fastest way to a large fine and a prison sentence.