Wanted;graphic designer for A Cartoon for the internet in rhyme (Flash files) Pay negotiable. 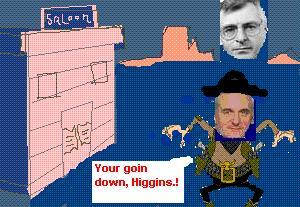 You will want to listen to the Ballad of Big Bad Bert Ahern while you enjoy our saga. Here is the link: Reduce this page, Copy and paste it into your browser,then return to enjoy the show.

I believe my script  will be very vote winning for the political party which supports and uses an idea similiar to the above "exchange of fire". The proposed animation will be a mirror of that you can visit on the website:  http://eclectech.co.uk/thistown.php    entitled; 'this town aint big enough for both of us' .Don't miss a visit. Great web site,this, (enjoy).

Instead of Tony Blair , (on the site) imagine "Bad Bertie" as the main character.  'Red (Joe)Higgins' ,the villain. His sidekicks, "Pat the Rabid" and Endem "boot hill" Kenny.  Bertie Ahern, the Irish P.M., dressed  in cowboy gear standing in front of the "Get Back Inn" saloon with a large Gladstone bag of donations (or loans?)at his feet stuffed with banknotes.

Music: Music with a traditional Celtic flavour, a la "Riverdance"  will be perfect.!

Wild west badlands. Wright and McDaid are two stetson hatted cowboys, driving to and fro in cars,across the prairie and driving over some of the smaller animals, a snake perhaps, a prairie dog..,a prairie rabbit,

The support rats are playing musical instruments as in the animation sketch on Blair.

(The words "Fianna Fail" on their hats.?)

(More confrontational music at: www.clinteastwood.net to listen to, as you read our epic poem.

Don't cross me Higgins or your going down.!

There's a bullet in my pistols, for ratbags like you!."

"We are the Soldiers of Destiny,

(Joe Higgins head pop up)( from a wheely bin) and comments:

"We will not pay those taxes which are absolutely hated.!

we will not be threatened,or lied to,- or intimidated.!

A rattlesnake like you Bertie- will never be sated

Stuff your bin taxes where you will be constipated.!     Chorus;

"The people will not pay, the taxes that are hated

The place where Bertie stuffs them, will make him constipated."


Bertie shoots Joe Higgins ,and his head pops back into the wheely bin .!

"Our stealth tax on the refuse sacks -almost went without a hitch,

We charged for every wheely bin-the poor enrich the rich!

Then the people started dumping all the garbage in the ditch.!

Although we gave the explanation- it was a tax for conservation,

there was extensive reservation- right throughout the nation.

Joe Higgins incarceration was the end to altercation,

"Ahern you're like a rattlesnake,who tries to shed his skin,

A "socialist" you call yourself -but no one's taken in.!

You are tolling every highway and taxing every bin,

And if we can't afford a private hospital we won't get in.!"

"They are tolling every highway and taxing every bin

If Larry Goodman owns the hospitals we won't get in.!"

Joe Higgins pops up in the wheelie bin:

among the irish population.

Claims for massive compensation are pursued with great elation

"In the race against waste ,we must now make haste,
Winning this election has to be faced.

Martin Cullen may be bullin, because of public distaste,

But those E-vote machines were a terrible waste,!

Although his beautiful consultants are in much better taste.!

"Martin Cullen was bullin, due to public distaste

Their cronies and their henchemen break bread in Ballybrit,

gamblin,and carousing,- while the rest of us eat sh*t.!

Wealthy speculators come from all across the land,

A word in Bertie's ear, and Mansfield finds remission.!

New Railroads then divert to  facilitate this master stroke;

It's called a "public-private partnership",-The public end up broke.!!

"The newspapers say we are most of us bent,
and even worse than that-plain incompetent.!
But the Farmers and the Unions are all content,
we bribed them with your taxes- and it,s money well spent.!
Chorus

" The Soldiers of Destiny refuse to relent
They bribed the people- and it,s money well spent!"

"Mary Harney was a P.D. with liberalising tricks,
who schemed to right the things that we didnt want to fix.!

( a baby rat lifts Bertie,s stetson,(he was sitting under it )

...and fires off a few rounds in the air with his sixgun!)

Backdrop to play; (A tree is in the corner with two ropes dangling ,and two refuse bag" heads"- (the hit and run drivers McDaid and Wright )swinging from the ropes and a wine bottle in their hands.

Characters in order of appearance;

Now who is going to help me make this fabulous flash file production.?

When I took a few lessons in computer usage in the local library,I discovered the world of the Internet and the wonderful access to instant information and knowledge that it opened-besides being able to persuade the Press to publish many of my musings on Irish Political Life.I also used it to book cheap Airline seats for my retirement wanderings.

Writing letters to the Irish papers,etc became a simple task,as did communicating with people all around the globe.

This was immeasurably useful when I joined a home exchange holiday club and was able to offer my home and car in Gran Canaria,during the summer months when I was absent in Ireland.

I have already had some wonderful holidays in some of my favourite countries such as Austria,and they cost me little more than the price of a Ryanair air ticket.

Ryan air has done for the skies and travel, what the internet has done for communications and freedom of expression..

Both, have begun to make the world a smaller place,a more accessible place;and I believe when all its peoples are internet empowered -and the exchange of information and knowledge is totally unfettered and uncensoredwe will live in a better and a more free world .Oppression and government censorship-even in a European context- will be consigned to history.

It is a little more problematic co-coordinating the home exchange concept if you do not have a second home to offer, nevertheless these clubs are expanding rapidly since the advent of the internet.I recommend them highly.

As my retirement from business more or less coincided with my new found internet skills I was able to keep in touch with all the news and happenings in Ireland during my winter sojourn in The Canary Islands. Another wonderful plus for the world wide web.

So it was at this time (2003-2004)that I began my prolific  letters to the editor writing phase.My rising indignation with all things Fianna Fail prompted me to initiate a campaign against them.

I felt that I could play some small role in helping to expose them.As Mother Theresa,the saintly Calcutta based nun,who administered to the poorest of the poor once replied,when a critic described her efforts as a mere useless  drop in the ocean;

the ocean is made up of little drops. People in Ireland are a little exhausted by endless revelations of nepotism and corruption,and are becoming a bit turned off the whole subject .Nevertheless we all have a part to play in trying to bring it to an end.

Granted the free press in Ireland in recent years have been  as dutiful ,as possible,in printing the truth ,but the repressive libel laws of the Fianna Fail Era are still with us.The truth can set us free .For now, under Bertie Ahern,  roguery and rosaries are the order of the day.

The government gagged our media for decades and made easy fortunes,in the Four Courts for the legal profession, and many crooked businessmen and politicians.Now we know why.

I include here on this web site a few of my own drops of water many of which I am proud to say were published in the Irish papers on a fairly regular basis.The subject matter is boringly similar in all of them so I have tried to vary my approach in order to retain the readers interest.

The bones are as it were clothed a little different,each time ,and a drop of topical essence of the days own scandal added for flavour. If even a hundred people with access to the internet read and believe, my task will have been worthwhile.If even a thousand, change their votes my effort will have been more than rewarded.