A government without a conscience.

Government consciously disregards the rights of the human embryo

By Rónán Mullen(writing in the Examiner (march 2006 )
WITHOUT a vision, the people perish, the Book of Proverbs tells us.
And although the ancient writer was not thinking of the current Fianna Fáil/PD Government, he would be hard pushed to find a better phrase to sum them up at the moment.
Take the Governments callous and cavalier attitude to human life at its earliest stages. In recent days it has emerged that a now-separated Irish couple will go to the High Court to dispute their competing claims to control the future of frozen embryos created during an IVF procedure. The wife wants to implant the embryos; her estranged husband is opposed. The case could have implications for the right to life of the unborn child in this country if, as is possible, the matter ends up in the Supreme Court for a decision about when life begins. The Government could have prevented all such controversies by legislating, as it had every right to do, to prevent the creation of surplus human embryos by fertility clinics and to prevent the use of embryos for research. But it did nothing.  It could have been so different.

In 2002, the Taoiseach made an  attempt to address the abortion issue by holding a referendum. Although the Governments proposal was narrowly defeated, Bertie Ahern did not go unrewarded by the electorate. Many voters were appreciative that the Government took a difficult decision and adopted a principled stance. Most pro-life voters appreciated a genuine attempt to protect unborn life. No doubt their votes helped in deciding some of the marginal seats that fell the Governments way as the general election count wore on, some months later.

A holy Blaggard.! Ash Wednsday again, and Bertie,s Papal credentials are worn on his forehead-as usual.

But since then, this Governments performance has been an unmitigated disaster where the unborn child is concerned. The principled approach of March 2002 has given way to cynical cowardice - or something worse. There were early signs of bad faith when the Commission on Assisted Human Reproduction (CAHR) was heavily made up of supporters of embryo research and professionals involved in controversial infertility treatments.

The CAHR organised an unbalanced conference at Dublin Castle which gave little time to those who believe human life should be protected from the moment conception. The lack of balance was evident when the commission recommended - by 24 votes to one - the legalisation of research that would destroy human embryos. A fair representation of public opinion, would you say?

The next twist in the saga involved a promise by the Joint Oireachtas Committee on Health and Children to hold hearings on the CAHR report, at which all shades of opinion would be heard. It is up to the committee to ensure there is equal opportunity for all sides in the debate to take part, said committee chairman, and Fianna Fáil TD, John Moloney.

That was last July. What happened? Moloney reneged on his promise. Soon, it emerged that a troika made up of long-time activist Senator Mary Henry, vocal liberal campaigner Fiona OMalley, and Moloney himself would study the report. There would be no hearings. Moloney also issued a denial that there had been an about-turn in relation to the cancelled hearings: I dont believe there were promises made. We consulted the public in the run-up to the report of the Commission on Assisted Human Reproduction.

Now, Moloney was not part of the Commission on Assisted Human Reproduction, whose findings were so hotly disputed by pro-life supporters. Whats more, his promise to hold hearings was given after the CAHR report was published. 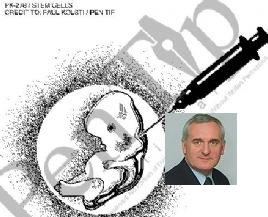 What explanation is there for this, and the strange composition of the sub-committee appointed to look into the report? Did Bertie lean on Moloney? Was a decision made to go liberal on embryo research and to silence debate?

One Fianna Fáil source defends the Government in this way: the plan was to let Mary Henry and Fiona OMalley lose the run of themselves and propose something so permissive that the Government could play for time and sit the issue out until after the next election. If this is true, it betrays a shameful attitude on the part of the Government.

As things stand, ethically questionable things are happening in fertility clinics because Ireland has no legislation in this area. The battle for control of actual human embryos, soon to be played out in the Four Courts, will shine a light into the dark corner we are now in. Politicking with human life is just not on. Inertia is not on.

BUT sadly, the Governments behaviour on this issue seems to betray something even worse than politicking or inertia. It appears to want, quite consciously, to disregard the rights of the human embryo. In December, Germany, Italy, Poland, Austria, Slovakia and Malta united to oppose the use of European tax money for destructive human embryo research.

The Irish Government refused to join them - despite the fact that our Constitution defends an, as yet undefined, unborn child.

This problem goes back to 2003 when Mary Harney backed EU funding for embryo research. It now appears that her successor in the Department of Enterprise, Trade and Employment, Micheál Martin, wants to do the same. Why? It would be interesting to discover what interest groups are seeking to influence the Irish State in this area. It would be interesting to know what correspondence has been received, and who exactly has the Governments ear.

Could it be that pharmaceutical companies are involved?  (The "Shannon Airport syndrome"?)We dont know, but they are never slow to campaign for embryo research, making highly questionable promises of miracle cures along the way. But we should be wary. In Australia, the pharmaceuticals clamoured for embryonic research using this kind of argument. Yet when permission was granted, the research was less about cures and more about the lucrative cosmetics industry. Some corporations are more concerned about patents than patients.

Meanwhile, two remarkable facts cry out for notice. One is that, as yet, embryo research has yielded damn-all in the way of cures. Every now and again we get enthusiastic media stories announcing a breakthrough. As often as not, it turns out to be a hoax. But the public are left expectant and confident of future progress. By contrast, the non-controversial research using adult stem cells, decried by some scientists as less flexible than embryo cells, continues to show promise and up to 65 different breakthroughs have been recorded, according to one report.

The second interesting statistic is that, where the embryo is concerned, Irish people are not as permissive as some pharmaceutical companies, fertility professionals and cabinet ministers. Last year, a Millward Brown/IMS poll found that 78% of people who expressed an opinion favoured legal protection for embryos.

The conclusions for the next Government should be obvious. Why not concentrate on making Ireland a centre of excellence for adult stem cell research? And why not establish a clear line of principle that this country respects human embryos? Its that simple. We need a vision we can all buy into. And we need to find cures we can all live with.

Can we have that medal back, Mr Ahern.?