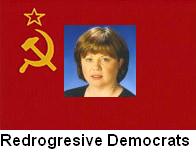 In the real world a leader who spends two months deciding to do nothing would be sacked in a day.

There was something all too typical about last week's revelation that Brian Cowen's much touted September 'state of the nation' address at Fianna Fail's 'think-in' was not going to happen.

An increasingly anxious public may have been hoping for a Roosevelt-style 'New Deal' speech but apparently our lethargic tee-to-Green-loving Taoiseach doesn't even think we're worth that.

But it's not as though we were going to miss much.

Mr Cowen was never going to demean himself by actually addressing the ordinary voter.

Instead, in typical style, the audience was to be confined to a closed-door session of his worshipful coterie of FF TDs.

Of course, as Mr Cowen prepares to fill the vacant speaking slot with a few bars of Paddy's Green Shamrock Shore it may be the case that the unlucky one from Offaly realised a pretty Obama-style speech was not going to change a whole lot.

Its absence does, however, mean we can only hope that a Taoiseach who is ruling with the zest of an absentee colonial landlord realises Ireland needs a revolution in the way it is governed.

The Government will argue there has been some muted recognition of this but if the unlucky one is to live up to the responsibilities he freely accepted, the surgery will have to be far more severe than the current war on our monstrous regiment of quangos. When it comes to reform, the Taoiseach needs to start on himself. So far the opposition's most effective attacks on Brian Cowen have focused on his apparent belief that in politics loyalty to the party is more important than loyalty to the State.

Of course, like all things political, loyalty is a virtue rather than a vice -- when taken in moderation -- but the great weakness of the 'clubbable' Mr Cowen has been the openness with which he has prioritised the good of FF above that of the public.

In fairness, Bertie Ahern was an even more enthusiastic advocate of this concept.

However, the subtlety of Mr Ahern's political persona meant the use of taxpayers' money to facilitate the interests of Fianna Fail was far more cunningly disguised.

Quangos may be the scapegoat for waste in Irish governance but this Stalinist collective is merely the symptom of a greater problem.

It is difficult to remember, but initially social partnership was an idealistic act of patriotism where workers and capitalists sank their differences in the national interest.

However, under Bertie's rule it slowly evolved into a sinister velvet glove which allowed Fianna Fail to control every aspect of public life.

Most of the criticism of social partnership has centred on the role of benchmarking in buying off the public sector.

That on its own was bad enough but the most toxic element of the politics of social partnership was the abandonment of any reform of the public sector in return for the unions' tacit support of Bertie.

The apogee of this was Mary 'I take the tough decisions' Harney's Health Service Executive where eight health boards amalgamated without a single job loss while 500 civil servants in the Department of Health were left with nothing to do.

In fairness, the HSE is not unique. The good old days of calling the lads in to divvy up the taxpayers' money means entire swathes of the public sector are now populated by bureaucrats who are engaged in a permanent conspiracy against the public.

All of this worked perfectly well for as long as the money flowed in but, as is always the case with the end of oligarchies, it's a big mess now.

Bad government is affordable in good times but the age of Bertie's big-tent politics where the only decision ministers had to make was 'Merc or Audi?' is over.

Any future social partnership deal which is not centred on the concept of reform -- and we're talking about the gaffers not the post-room boys -- will represent an utter failure of government.

It's time for 'Clubbable Cowen' to face the reality that while change may upset his social partnership pals and his Cabinet chums the Taoiseach must steel himself to change his nature and start making tough decisions.

If he doesn't our unlucky Taoiseach runs the risk of destroying the economy, his own reputation and, most importantly of all (well, to him at least), his beloved FF.