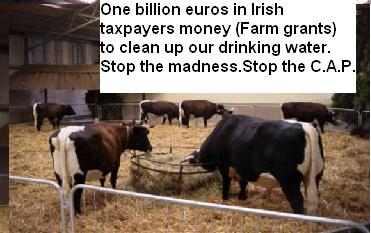 In July 2005 Fianna Fail announced yet another grant to irish farmers,this one estimated to cost one billion euros. Effectively the government (or rather you, the taxpayer) are paying the full cost of building sileage storage facilities for Ireland's estimated full-time and part time farmers,to stop the pollution of our Lakes,rivers and drinking water.

First you pay them a subsidy to produce milk and beef.

Second you pay them a subsidy to 'dump' it  in third world  countries  like Egypt.

Finally you pay them a subsidy to store the shite that nobody wanted them to produce in the first place.!!

THOUSANDS of farmers were given the go-ahead in december 2004 to apply to a reserve fund set up for those in danger of losing their share of the 1.322 billion per year of EU subsidies which will be converted to a Single Farm Payment system in the New Year. !

Agriculture and Food Minister Mary Coughlan announced four categories of farmers automatically entitled to make an application to the National Reserve.(otherwise known as the Irish taxpayer)
They are the families of farmers who joined the Early Retirement Scheme before or during the 2000 to 2002 period and who leased out their land to a third party; farmers who invested in extra production capacity or land, or sold to the milk quota restructuring scheme and changed their farming system, in the 45 months to October, 2003; and active dairy farmers unable to supply milk this year.

There may also be National Reserve aid for those who commenced farming after 2002 or who did not receive any direct payments if they farmed in 2002.

Question is can the rest of the long suffering citizens of Ireland join in,and profit from this ridiculous farce as well!

Did you know that hundreds of wealthy farmers mostly in the southern counties of Ireland receive payments averaging 100,000 Euros per annum from the European taxpayer to grow sugar beet which nobody wants.?

Did you know that Irish factories are then subsidised to process it into sugar, and it is then sold in Europe at three times the world market price for sugar produced far more cheaply by countries such as Cuba.?

Why do we need so many immigrants when these farmers could be profitably employed in our industries and factories instead of draining the taxes of the working people of Ireland & Europe.?

The Minister for the Environment has clashed with the European Commission over its decision to take legal action against Ireland for eight breaches of environmental law.

The EU environment commissioner, Mr Stavos Dimas, said the actions related to failure to transpose environmental directives into law - some of them dating back to 1991 - and failure to implement some directives which had been transposed.

He also gave examples of actions the EU was taking against Ireland for situations including:

delays in upgrading town sewage plants;
bad odours from sewage plants;
the disposal of contaminated construction waste at Tynagh mines in Co Galway;
the removal of waste and the restoration of wetlands in the Boyne estuary;
the failure to submit reports on the use of certain ozone depleting substances;
the failure to submit a plan to limit certain air pollutants, and
the failure of the State to properly implement the EU Directive on the use Environmental Impact Assessments.
In relation to the delays in upgrading town sewerage systems, the commission specifically mentioned plants at Bray, Co Wicklow; Shanganagh and Howth, Co Dublin, Letterkenny, Co Donegal, Sligo town and Tramore, Co Waterford.

The commission said it had "a duty to ensure that each member-state lives up to its commitments to safeguard the environment and human health".

Whatever about the environment, the decline in walking tourism is not our fault, insist farmers

A farm leader has reacted angrily to a claim by Fáilte Ireland that tourist numbers are falling because of a lack of access to hillwalking routes. Fáilte Ireland said there had been a dramatic fall in the number of people coming to Ireland for hiking holidays.

It said the problem of access, and the fact that people were taking shorter breaks, had resulted in just 168,000 people visiting Ireland during 2003 for walking holidays, compared to 325,000 in 1999.

In April 2005, it was announced that two Co Wicklow An Óige hostels, used generally by walkers, will be closed this year because of a lack of trade. Tourism interests claim the number of walkers coming here has dropped by 30,000 since access problems arose.

Meanwhile the Irish taxpayer,forbidden to enjoy his own dearly subsidised environment,is close to destroying the livelihood of South African farmers.!

tonnes of cheese  yearly,to SouthAfrica - most of which is cheddar. Our dairy produce is well regarded by consumers in SA. (it,s very cheap) The Milk Producers Organisation of South Africa which counts 82 per cent of South Africa's dairy farmers among its membership, alleges that the Irish cheese mountain has "compromised the competitiveness of South Africa's domestic cheese industry."

They claim that South African retailers can produce cheese for around 3.90 a kilo while imported cheddar cheese retails in South Africa at prices as low

The South African milk producers claim that this anomaly exists despite the fact that the actual cost of producing cheese in Ireland (before EU subsidy) is nearly double that figure, at 3.40 per kilo.The surplus is  then 'dumped' on international markets.You the taxpayer pay for the dumping.!

THE tolled section of the Dublin-Galway motorway cost 6m more per kilometre than a State-built section of the same route. The 39km motorway from Kilcock to Kinnegad, which opened in 2005, was built under a public private partnership at a cost of 550m - an average of 14.1m per kilometre.

The 28km section of dual carriageway from Kinnegad to Kilbeggan, which has been completed as far as Tyrellspass, will cost 228m - an average of 8.1m per kilometre.

This stretch of roadway was built by the construction firm Ascon on behalf of the State and is free to motorists. In contrast, the M4 motorway was built under a public private partnership and will be tolled until 2035.

The Labour Party said the figures, which were supplied to the Irish Independent by the National Roads Authority (NRA), highlighted a "huge discrepancy". Investigate

The party's transport spokeswoman, Roisin Shorthall, called on the Comptroller and Auditor General, who has already examined the use of public private partnerships (PPPs) for new school buildings, to investigate the cost of the M4 motorway.

"It's all very well seeing the Transport Minister cutting the tape and telling us these roads are coming in ahead of schedule and under budget. We don't actually know what it's costing the taxpayer at the end of the day."

The state paid 152m to the Eurolink consortium as part of its contribution to the M4 PPP project. In return, the consortium guaranteed to operate and maintain the motorway for 30 years and to share the toll revenue with the NRA once traffic levels exceed a certain level.

The M4 toll prices were increased this month.

But the NRA said that it was an oversimplification to compare the per-kilometre costs of each road without taking other factors into account.

Its spokesman, Sean O'Neill, said the cost of acquiring land could vary dramatically for "different projects".

In an echo of the former US Defence secretary Donald Rumsfeld, he added there was also a multitude of "knowns and unknowns". And the I.F.A. grow fatter,like their heifers on taxpayers money..