The Panzers of the Notorious Martin Cullen Reichfeuhrer for Environmental Destruction; Air Terminal chaos ; Crushed Castles; Heritage Loss ; Disfunctional E- voting Machines; and- last but not least -Beautiful Consultants: breached the last section of the M50 motorway in July 2005.It is Dublin's only (and oldest) ring road. ! First mooted 33 years ago, this can hardly be described as a Blitzkrieg.! The road was, not surprisingly ,a grandiose parking lot for Dublin's motorists at peak periods,in recent years partly due to his lucrative Toll Bridge fortification which collects cash in the old fashioned way from all who venture across the river Liffey; and partly due to the modest increase in car ownership over the past 33 years.!

However, another such project is now a gleam in Martin's eye!(A second ring road.!).. Alas neither you ,nor I, nor Martin will live to see the opening ceremony....

The 'new' carriageway took longer to build, than the number of years Jesus Christ spent upon this Earth.

As he lit up another cigarette,in the breezy hills of Carrickmines he stamped his jackboot in frustration on the old discarded stub and declared to the stunned media assembled there, that those who 'oppose necessary infrastructure' are 'robbing the taxpayers of Ireland' .This shock promulgation was probably quite effective in distracting the journalists from more concrete facts about the new motorway's chequered history. He bizzarely described the heritage protestors also,as 'begrudgers'? and 'hurlers on the ditch'!

Martin's reputation as Bertie's most able field commander has however, been damaged,but Martin holds Waterford ,for the 'Soldiers' and his command will not be undermined at present.That's politics.

The last 12 kilometres of the highway has entered the Guinness book of records.It cost some 600 million euros,- 50 million euros per Kilometre. 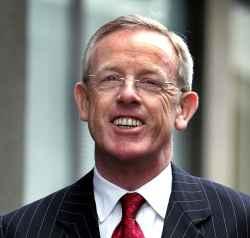 The explanation for this ? Well a busy gentleman named Frank Dunlop, a former public relations/press officer/advisor and general dogsbody to Charles J.Haughey; had ,on leaving the civil Service, re-invented  himself as a well connected dogsbody well placed to cross the palms of county councillors nationwide with silver...in return for rezoning favours for his clients.Frank was a kind of pimp,and his 'johns' were Fianna Fail public representatives. And they were bought cheaply. God know's how cheaply!

Frank proceeded to distribute the property speculators cash payments to the awaiting Fianna Fail (some others too, it must be recorded !) county councillors, in the Dunlaoghaire-Rathdown county council, to facilitate the re-zoning of lands such as those at Carrickmines , which border the motorway. For 30 pieces of silver these public representatives cost the taxpayer a kings ransom ..in the end. And they have not gone away.!

The shadowy company which owned the land eventually received massive payments for the compulsory purchased land at re-zoned prices. A fortune in taxpayers money went to a shadowy offshore entity called 'Jackson Way' .The beneficial owner of this company is believed to be one ,Jim Kennedy ,a former one armed bandit casino owner in Dublin whose immense tax evaded wealth was garnered at the expense of gambling addicts citywide,and necessitated his relocation the Isle of Man.

He was of course an associate of Liam Lawlor and  the notoriously corrupt Dublin City Council manager George Redmond.!

(To this day Jim Kennedy  controls,by proxy,(his wife,it is rumoured) numerous one armed bandit slot machines in  casinos in the heart of Dublin-one of which is located not 100 metres from O,Connell Bridge.! These casinos continue to circumvent the law to this day, and it is an open secret that the sums wagered in these machines-and of course the payouts- are much higher than is legally permitted.

The scandalous lack of effective legislation and supervision of gaming outlets throughout Ireland has created dozens of Jim Kennedys, in the many amusement arcades nationwide throughout the past decades. The obsolete legislation governing their activities has been ignored with total impunity.Many individuals  have built huge fortunes/ property &hotel empires by impoverishing thousands of  gaming machine addicts. The Gardai have stood by helpless.In fact one retired Garda owns two Dublin based casinos and he and his family  drive about our capital city ostentatiously displaying their wealth, driving  "state of the art" high profile mean machine/sports cars...

Jim Kennedy now controls his extensive property portfolio from the security of the Isle of Man a small offshore tax haven for hoodlums of every conceivable activity, located in the middle of the Irish Sea,some 35 kilometres off the coast of Ireland.

Martin Cullen however was referring,not to these gentlemen, but to the small group of conscientious heritage enthusiasts who attempted to prevent the National Roads Authority from building an interchange- to facilitate Jackson Way !-on the historic remains of an old Anglo-Saxon fortification discovered duting excavations.They appealing to the Judiciary to halt the vandalism, alas the government have the power to amend laws.

That is the power we citizens give them, when we elect them.!

The 'Carrickmines Castle protest Saga' is estimated to have cost the taxpayer a trifling (relatively speaking) 20 million Euros. Fianna Fail arrogance and corruption alone,was responsible for this expensive fiasco.

Who, pray tell us Martin ,are the 'robbers' then. .?- Your county Councillors.? -The shadowy speculators who owned the lands.?- The conscientious objectors.?

Judging by Martin's shrewd -if confused metaphor-attack on the Heritage defenders his new P.R.services are more polished than those commissioned by him previously in Waterford for a modest fee of 300,000 Euros...( under the personal management of the beautiful Monica Leech.!).

Fortunately for both the Judiciary and the minority who oppose his relentless Juggernaut ,the doors of Auschwitz are currently closed for business . However if re-elected with an overwhelming majority..there are ways and means of resolving the critical infrastructure impasse. (Sandymount,excluded...)

Nevertheless, CONGRATULATIONS  are in order to former Minster for the Environment, Martin Cullen, who must be delighted at his posting to the Department of Transport and also with the fact that he managed to oversee the locating of the controversial National Biological Records Centre (NBRC) in his home town of Waterford, just 24 hours before his departure from the Custom House. The thorny subject of locating the NBRC hit the headlines in July when Des Crofton  director of the National Association of Regional Games Councils (ie, gun clubs)  resigned from the wildlife committee of the Heritage Council in protest at what he considered interference from Cullen in the Heritage Council's selection process for the new center.

Whats all the fuss about declared his beutiful P.R. consultant Monica, in a press release, If Martin had not snatched them, somebody else would have ,shure all the ministers are taking bags of toy soldiers(civil servants) home to their own constituencies-its like war booty-the legitimate spoils of office.!

Nov 2005; The N.R.A.(National Roads Authority) is to spend 2 million Euros to provide radar based traffic counters linked to a computer system which will display the amount of time you can expect to spend travelling between Rathcoole and the Red Cow roundabout at the Northbound section of the M50,"To help you make strategic decisions on your journey."Electronic message signs on the N 7 will advise you if you would be quicker abandoning your car and unpacking a fold up bicycle from the booth...(problem is, you cannot cycle along the M 50). Otherwise,it sounds like good value to me. the N.R.A.declared that travel time along this route can "vary significantly" resulting in driver stress.

It seems that knowing for sure you are going nowhere fast reduces the blood pressure and encourages alternative  nerve calming measures-such as deep breathing (Hatha Yoga exercise)...A free booklet on the technique is being distributed at the M50 toll both, to all customers.!!   I kid you not.

Sir - I am willing to pay a toll to use a motorway network.

I am not so willing to many pay tolls on a start/stop network of intermittent dual carriageways connected by pothole-ridden boreens.

I can accept that the completion of our motorway network is predicated on funding raised through tolls. I cannot accept that funds raised by toll roads are not ring-fenced to build and maintain roads.

The M50 has already yielded tolls many many times more than the building costs, and still there is no immediate end in sight. I can see how public-private partnerships may be a way of raising initial funds sooner.

I cannot see how that can be allowed to have uncapped indefinite returns at a rate that Klondike gold prospectors would not have dreamt of.

The authorities try to convince us that they could never have realised how popular the road would become. Could they not have looked at London's M25 as an equivalent example?

The private end of the public-private enterprises are indeed very private. Who are they, who selects them (I'd imagine there is a queue) and should we be concerned if any of them has ever made any kind of political donations?

If the National Pension Fund is looking for solid investment opportunities, why do they not participate in this? Are they not allowed?

With my SSIA about to mature, the next gravy train I want to get on is this public-private toll road lark. How do I go about it?

( Tough shit Michael get your "Golden Circle Card"  as soon as possible. Only the Ballybrit Brigade may apply though..

The next toll Blitzkrieg:

METRO West was launched (again) in November 2006 with the help of five ministers: Martin Cullen, Mary Harney, Brian Lenihan and his brother Conor, and Noel Ahern. Mr Ahern is the brother of the Taoiseach, the most indefatigable launcher of all as befits the leader of a government that would launch anything from the Titanic to a rowing boat.

The Famous Five, however, should have paused a moment to ask themselves whether the show that took them away from their desks justified the word launch.

Metro West was launched before, in the sense that it was announced just over a year ago. Not much has changed since then. The announcement of a public consultation will not engender any great excitement. Nor will the target date for completion, 2014, at least three general elections away.

And there's the rub. The project may be completed in 2014, or some other year, or not at all, but the next election has to be fought and won in Dublin. That calls, not for achievement or even exertion but for the appearance of activity.

This will not be the last launch, or relaunch, before the election. Voters can do little about the repeated trumpet calls except to ignore them to the best of their ability.

Meanwhile, though, someone should remind Mr Cullen that the lack of orbital public transport in Dublin has been a problem for at least half a century. And Metro West will not cure it.