A three-year restructuring and investment plan for the dairy processing sector, to be led by Enterprise Ireland with a dedicated budget of 100 million.

A new farm modernisation scheme to cover all aspects of agriculture, with 50 per cent grant aid in disadvantaged areas and 40 per cent in other areas.

A national initiative on farm consolidation, including both relief from capital gains tax and stamp duty, and long-term land leasing incentives, to encourage "investment and consolidation" of land.

Increased payments in the early retirement scheme to facilitate the transfer of land to younger farmers and tax breaks for young farmers setting up in the business.

500m-1bn for grants for slurry storage to meet Nitrates requirements

500m (still in negotiation) to allow walking tourists access to the upland hill and mountain areas.!

And this is what you will get in return:

"Why don't ye go rob a few banks or something -and start making some kind of an "honest living" for a change.

INDIVIDUAL farmers should not get more than 40,000 a year in EU agricultural subsidies, and full details should be published of who gets what, MEPs said in September 2006..

These moves would save EU taxpayers' money and promote family farms, and should be introduced as part of measures to reform the EU, said independent MEP Kathy Sinnott.

She was speaking at a press conference in Dublin with Danish MEP Jens-Peter Bonde, who is demanding a radical overhaul of the EU to make it more democratic and transparent.

Ireland and Denmark are agricultural nations and should be happy about farm subsidies from Brussels, but these do not work in the interest of smaller farmers, said Mr Bonde.

"In this year's budget procedure, Kathy Sinnott and I will introduce an amendment calling for the abolishment of all subsidies above 40,000 per farmer or legal unit per year," he said.

There is no cap on EU subsidies to farmers or commercial agricultural companies, which means that wealthy businesspeople like beef baron Larry Goodman and Queen Elizabeth get hundreds of thousands of euro from the EU.

Nearly half the EU budget goes on farm subsidies, but Mr Bonde said the Irish Government consistently refused to be transparent over where the money went. "I have made countless inquiries over the years but have never received a serious answer," he said.

The Government had also signalled it would keep refusing to give out this information even if all Irish representatives demanded transparency, he said.

Mr Bonde is one of the most high-profile critics of the EU and wants Ireland to reject the draft constitution on which it has yet to vote.

"Irish people should urge their Government to be a frontrunner in the fight for transparency and uphold the citizens rights to access full information in Europe."

If accepted, the draft constitution would reduce Irish influence on EU affairs in favour of the United Kingdom and other big countries, said Mr Bonde.

"What it will mean effectively, is that no one will need to consult the small nations like ourselves anymore. We will become powerless against the voting might of countries like Great Britain and Germany," he said.

And down to paying some taxes..

farmers get taxpayers money-on Bertie,s orders-after they are exposed as tax cheats.!

Tax-cheat farmers  get E.U. funds from Bert Ahern, without having to produce evidence of honesty in their dealings with the state...( while even a taxi driver has to have a tax clearance certificate to renew his livelihood.!)

SOME 583 tax-cheating farmers will get the new EU Single Farm Payment next December - without producing a tax clearance certificate, the Department of Agriculture has confirmed. Farmers are the countrys biggest tax cheats and have paid over 45 million in default payments to the Revenue Commissioners over a three-year period,

according to an Irish Examiner analysis of the official figures. This was an average payment of 77,857 for each tax-defaulting farmer from March 2002 to March 2005.

A separate Revenue Commissioners report has also revealed that farmers paid the smallest income tax contribution of 1.5% compared with the PAYE workers, who paid the largest amount at 77.5% in 2002. In money terms, this translated to PAYE workers paying 6.7 billion in income tax that year compared to farmers who paid only 126.2m.

Talk about name and shame - farmers were shown this week to be the single biggest occupational tax defaulters, with 35 of them owing an average 84,359, out of a total of 170 settlements. And where were Taoiseach Bertie Ahern, FG leader Enda Kenny and Labour leader Pat Rabbitte on Tuesday? In Mogeely, in east Cork, for the National PloughingChampionships! God help us when the Labour party need these votes.!!

Promises promises...in Mullingar.The predators circle for the car with the star.! 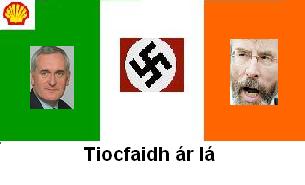 in 2004, there was a flight of capital of sorts as syndicates of "poor farmers" investing huge sums of money in the European property market. I wished them well in a letter to "The Examiner"newspaper;

"Nice to see property section reports of our poor farmers buying up those office blocks in Prague and Warsaw,which Liam Lawlor does not already own.

Its fulfilling a civic duty-investing the proceeds of their Brussels sourced C.A.P. funds in the new-entrant countries,rather than Ireland.

Maybe the milk ,at least ,will be cheaper here.some day.

Hopefully Polish farmers will one day be able to reciprocate,and buy a few one- off rural office blocks,with secure long lease tenants in Cahirciveen or Castlebar when Martin CuCullen has finished building his Roman Road Empire on the ruins of bygone conquistadors.

The bad news is that pending the hoped for self destruction of Berties P.D minders;-the I.R.A.are dissolving themselves and Gerry Adams and Co. are dusting off their C.V.s as potential coalitionists

 Kiss and make up,Gerry and Bertie.!? Car-with- the- Staraspirants and partners with their fraternal Mafiosi partners,- the other Republican Party, whose present marriage has gone coldIn politics, anything is possible.

An alternative cobbled together coalition of Greens, Pat Rabbite,and Big Farmers,also has an air of unreality to it. Pity the long suffering ,common people.

Who will deliver us from these turbulent tyrants?

Pat Rabbite leader of the Labour Party and Enda Kenny of Finn Gael have signed a pact of co-operation called The Mullingar Accord,while Berties boys have summoned the Catholic Church and its most radical priests to hear group confessions from the party and boast of a new future in which they would retain office  ad infinitum by implementing a more caring policy of throwing a few of the Celtic Tiger morsels to the hungrier wolves in our society.  Meanwhile the farmers and Fianna Fail speculators build on...or prepare the ground, wherever it may be.!

Always in clover at working people's expense; Fianna Fail and their farmer friends;