A place where Ray may pray 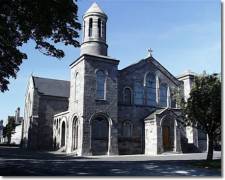 A PLACE WHERE RAY MAY PRAY.Arbour Hill chapel, beside the former military prison,steeped in republican history.The Minister for Justice is jailed nearby-briefly.

His bosom buddies,in the same political party;the same group of politicians, that oversaw the most corrupt decades in the history of the Irish state,are controlling our destiny to this day.

Until recently, only one of them a wealthy multimillionaire fraudster ,had spent a brief period (one week)as guest of the Nation,(Liam Lawlor)in a comfortable prison environment where he enjoyed full access to the outside world,and the management of his ill-gotten property empire,both in Ireland and eastern Europe.

There were also allegations that Ray Burke received payments from a company called "Rennicks Ltd" which the details of which were published in the Irish Times in June 1997 immediately after the General Election. If the article written by Geraldine Kennedy was published before the election, it is doubtful if the Fianna FáilProgressive Democrats coalition would have gained power. Rennicks is a company associated with Tony O'Reilly. Strangely, the day prior to the General Election O'Reilly's Irish Independent newspaper ran a front page editorial against the Fine GaelLabour Coalition Government entitled "Pay Back Time" in order to influence the electorate.Pay back time for whom? The publishing of the editorial broke a long standing moratorium that all coverage of the election ceases a day ahead of the poll. The Flood and subsequent Mahon Tribunal have yet to deal with "Rennicks Payment" issue. The question of whether the Mahon Tribunal can now investigate the "Rennicks Payment" has now come before the Irish Courts (Sept 2005) by way of an application for a full hearing into whether the Mahon Tribunal can investigate the alleged Fitzwilton-Rennicks payment to Ray Burke, the High Court decided that a full hearing will take place. A date has yet to be set for the full hearing by the High Court.

The most disturbing facet about Ray Burke,Fianna Fail, and the irish electorate, is if Ray Burke returned to the political fray in the morning in any county outside "The Pale" (Dublin) likely he would be returned to the Dail, like Sean Doherty, Beverly Quinn, Michael Lowry, etc- with an overwhelming majority.!

They gave everything away even future generations natural wealth.