Tax the poor- Enrich the rich.

One law for the rich-

FORMER Taoiseach Charles Haughey received pension payments of over 132,000 in 2004 as part of a 12 million pension bill for former Oireachtas members. 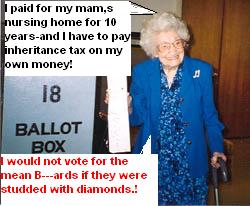 Another law for the poor;-!

The Irish Independent;29/08/05
The Government is reportedly planning impose inheritance tax on compensation payments made to the estates of people who were illegally charged for nursing home care.

Reports this morning said compensation was due to the estates of up to 50,000 people as a result of the imposition of illegal charges between 1976 and late last year.

The reports said draft proposals from the Department of Health had suggested that inheritance tax be imposed on the repayments to these estates.

The proposals also reportedly call for the money to be taken into account when the beneficiaries are being assessed for social welfare entitlements.