SOME of the country's best-known tourist towns have gone from boom to bust during Taoiseach Brian Cowen's first eight months in power, an Irish Independent investigation has found.

The probe uncovered an alarming rise in the number of jobless in many of our internationally famous towns.

The three worst-hit towns are all in Co Kerry, with increases of 94pc in those signing on the dole in Killarney, 92pc in Killorglin and 90pc in Kenmare.

Another prominent tourist town, Westport, in Co Mayo, has suffered a rise in unemployment of 84pc.

But an analysis of live register figures in his eight months as Taoiseach show dozens of other towns have since suffered huge rises in unemployment.

In Castlepollard, Co Westmeath, the jobless rate has increased by 90pc during the period, while in Ballyconnell, Co Cavan, the rate is up by 74pc.

Many of the towns are now facing a bleak future, with little prospect of the building boom, which was crucial to their economic well-being, restarting in the future. Most have an over-supply of houses and many of the immigrant workers who rented them are returning home.

Mr Cowen may draw some consolation from the fact that the jobless rate in his home town of Tullamore has only risen by 38pc.

However, there are far steeper rises in other towns in his Laois-Offaly constituency. Unemployment in Edenderry is up by 69pc, while in Portlaoise it has risen by 60pc.

Tourist towns like Kenmare, Killarney and Westport traditionally experience a rise in unemployment in December due to the seasonal nature of the work.

But the analysis of their figures shows this is not a major factor in their high-percentage increases.

A spokesman for Mr Cowen said the Government was determined to resource state agencies such as Enterprise Ireland, FAS and IDA Ireland to provide new jobs and training for the towns affected.

However, Fine Gael enterprise spokesman Leo Varadkar said the sheer scale of job losses in recent months was "without parallel" anywhere else in the world.

There have also been steep increases in commuter towns such as Maynooth (72pc), Portlaoise (60pc), Trim (54pc) and Newbridge (53pc).

Mr Varadkar said the people living in these towns were generally young couples with big mortgages.

"These town are going to suffer badly from the recession and we are going to need Government to focus on softening the blow by ensuring the National Development projects in these town go ahead," he said.

Labour councillor Sean O'Grady, who is based in Killarney, attributed the rise in unemployment in his town to the decline in the tourism and construction sectors.

"The biggest numbers would be in building, which has ground to a halt," he said. He also said that hotels and B&Bs, which would have traditionally carried out building projects during the winter, did not appear to be doing so.

In Kenmare, Fine Gael councillor Michael Connor-Scarteen blamed similar factors for the rise in joblessness in his town. And he warned the situation would get worse. "There will be a lot more signing on," he said.

In Ballyconnell, Co Cavan, Fine Gael councillor Peter McVitty said the end of the building boom had put jobs in local cement factories and quarries at risk. He also said that Polish builders who had rented houses were now going home.

"The housing has slowed down big time. It couldn't go on forever and you wouldn't have to be a rocket scientist to go know that," he said. 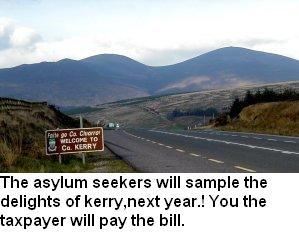 Membership of Fianna Fail has been mandatory for self made millionaires since the days When C.J.H. was selling irish passports " for cash" to some of the worlds greatest fraudsters

A typical beneficiary of this scheme was Corkonian ,Noel Duggan-one of many prominent Fianna Fail benefactors who has good reasons to be thankful to the most corrupt "crony politics" administration, in the history of the state.

Noel received a "loan" of 3 million euros from one Sheik Khalid bin Mahfouz back in 1990, in return for an irish passport from Charles Haughey.

It was extradition insurance and well worth the money.The sheik was a rather high profile fraudster-not untypical of Charlie's benefactors-who ran a large private bank (B.C.C.I) which was a clearing house for international Mafiosi,drug dealers, and tax dodging businessmen.The bank also bizarrely had links to both Al- Queda and the two Bush presidents: George Bush senior, and junior.!The bank eventually collapsed and swindled many billions of dollars from honest-as well as crooked investors.

Noel has been in receipt of over 2 million euros in grants from the I.D.A. and Bord Failte to assist finance some of his schemes.He has belatedly gotten in on the great "house the refugees" bonanza which has seen many shrewd well connected Fianna Fail foxes recover their initial investments in old hotels or warehouses within two years.!

He has bought a hotel in Killarney and " luckily" simultaneously landed a contract with the Dept of Justice "asylum seekers accomodation section " to house the never ending stream of refugees who arrive here without much publicity any more.Nigerians and Congolese may be riding around in jaunting cars next year.!

The North of Ireland has been spared this problem, as the I.R.A. have vacated the ample accomodation availible in the numerous prison there and asylum seekers arriving there are probably encouraged to move south to sample the much more hospitable accomodation provided by Fianna Fail supporters in the tourist town of Killarney.!

EIGHT well connected individuals and contractors will between them earn more than 30m this year ( 2005) for providing accommodation for asylum seekers.

A small number of  Friends of Fianna Fail" run multiple accommodation centres for asylum seekers, according to documents released under the Freedom of Information Act.

The small group manages more than half the accommodation capacity and is involved in 35 of the 78 properties used to house asylum seekers throughout the country.

But the Department of Justice refused to say how much taxpayers' money was going to each of the contractors.

They range from between 189 and 230 per person per week in direct provision accommodation, down from as much as 334 before direct provision was introduced in 2000. The rates for self-catering provision for asylum seekers are between 133.70 and 147.

Among the big players are Millstreet Equestrian Services Ltd which is involved in a total of six centres, in Cork, Tipperary, Waterford, and Kerry, with a total capacity of 624.

Campbell Catering Services Ltd is involved in four state-owned centres in Clare, and in Kerry with a total capacity of 580.

Eurest runs five state-owned centres in Cork, Athlone, Ballymullen Barracks in Tralee, Magee Barracks in Kildare, and Park Lodge in Killarney. The total capacity in these centres is 1,025.

In all, the eight contractors accommodate over half the total capacity of 8,300.

An estimated 71.1m will be spent this year.