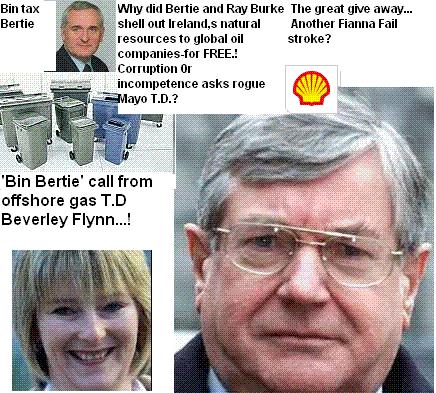 The pot calling the kettle black.!

Time to re-negotiate a rotten deal.?

Burke abandoned the government stake against the advice of his department and abolished payment of royalties. In 1992, intense lobbying by the oil companies led to a lower tax rate of 25 per cent under then Minister for Finance Bertie Ahern. The tax could be written off against commercial costs over the previous 25 years, including costs incurred on work in other jurisdictions. Frontier licences' were introduced, allowing oil companies to hold drilling licences for up to 20 years.

Consultants Wood McKenzie, in a report in the late 1990s, estimated that Corrib and surrounding areas had gas reserves of between five and seven trillion cubic feet, worth about 22 billion in current prices. The Irish Offshore Operators' Association,a lobby group for big oil , says the tax arrangements are 'essential ' to maintain exploration interest in Irish waters, owing to the poor exploitation record to date. Bertie's generousity to  oil speculators knows no bounds- and today the nation is being bled with water taxes,bin taxes,and numerous other impositions  because our national resources have been handed  to them on a silver platter.!

Shell E&P Ireland and Island Oil and Gas are to take up new frontier exploration licences offered by Minister for the Marine Noel Dempsey on the north-east Rockall Basin.

The offers for a maximum of 16 years have been made following applications by the companies for about 1,650 sq kms or 10 per cent of the total area extending off the north and west coast. However, the Minister's move has been criticised by Mayo TD Dr Jerry Cowley (Ind), who has called for a freeze on all new exploration licensing in Irish waters and a "root and branch" examination of the changes in licensing terms made by former finance ministers Ray Burke and Bertie Ahern between 1987 and 1992.

Dr Cowley said he was "appalled" at the Minister's decision to issue the offers when five Mayo men were in prison over their opposition to the Corrib gas onshore pipeline. "Many of the people who marched in support of the Rossport five were also marching to call a halt to the plundering of our natural resources without adequate return to the State," Dr Cowley said. Applications for the north-east Rockall Basin licensing round were publicised by the Department in July last year under the 1992 licensing terms.

THE FAILURE of fledgling company, Grianan Energy Ltd, to land one of the exploration licences dished out by Noel Dempsey for the Slyne Erris Donegal area recently shouldnt have come as a surprise given the interesting make-up of the backers  who include members of the "notorious McBrearty and Shortt families who played central roles in exposing garda corruption in Donegal. Furthermore, the philosophy behind the company would not go down well at the average PD dinner party.

The licences were awarded by Noel Dempsey to the likes of Statoil, Island Oil & Gas, Lundin Exploration, Sericea Energy(UK) and Shell E&P Ireland. However, the most interesting name in the hat was clearly that of Grianan, which was only established at the start of this year. The company has no track record in the exploration business but instead adopted a strategy of cashing in on the Rossport Five campaign by attacking the multinationals. This didnt play well with the government although the stated reason for the thumbs-down was that the application was invalid as no work programme was provided nor was the necessary technical competence or offshore experience demonstrated.

So who are Grianan Energy? According to the Companies Registration Office, the listed directors are Dermot McErlean, who gives his address as Muff, Co Donegal, and Glenties farmer, Seamus Campbell. Usually, however, Dermot McErlean gives his address as Culmore Road in Derry which is where his company, McErlean Enterprises Ltd is registered. This company has recently applied for planning permission to build 40 houses at Lifford Co Donegal.

Both received large sums in compo as a result of their treatment at the hands of the gardai.

These names are unlikely to have gone down well at the Cabinet table.

Even more upsetting for the FF/PD government is the companys philosophy.

This was spelled out by director of finance, Mark Turner, when he addressed the Joint Committee on Communications, Marine and Natural Resources earlier this summer, at which he was joined by McErlean and McBrearty. According to the transcript of his presentation, Turner was damning of the multinationals which control the exploration industry and he suggested that the politicians should limit the companies who can apply for licences. He also said the 1992 legislation

could well have been drafted by a number of multinationals rather than by the Oireachtas.

Moreover, although he claimed that the Grianan backers would have no difficulties raising funds to invest in the savagely costly drilling programmes (money is coming at us from every direction) Turner hit out at the extraordinary tax breaks given to the exploration companies here: I do not believe the oil and gas industry requires significant tax incentives ... Doing business in oil and gas in Ireland is a no-brainer ... it is ridiculous for anyone in the oil and gas industry to talk about subsidies and incentives. With such an, er, unusual approach to the business, perhaps it is not surprising that that Grianan is not a member of the Irish Offshore Operators Association lobby group which represents the big boys here.