Just throw cash in to the black hole, Now spinning-out of control, it's on a roll,-on a project near you.! http://www.soldiersofdestiny.org/healthreform.htm

A poisonous brush off from Bertie.?

The latest figures for the overall European budget show that the vast majority of EU aid coming into Ireland - almost two thirds of the 2.8bn received - goes to a small number of farmers.

What was Bertie doing in June 2005 the day the dail voted on the Garda bill which watered down  provision for an independent ombudsman,empowered to monitor their lawless activities.?

1 Having a make over in the 'Blue Room' beauty boutique in Drumcondra.?

2 Making provision for Celia, in a new government quango.?

3 Partying with the his new flame,the widow Anna  Bogle.?

5 Closing down a buddy's nursing home at Leas Cross.?

No 4 is correct,-0pening a buddy's bathroom showroom.! 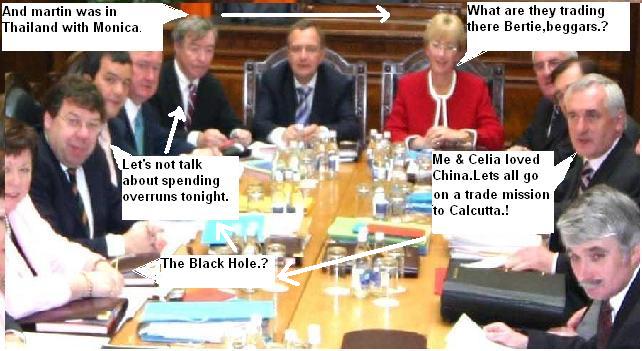 When will the taxpayer get his money back.?

A TOLL company yesterday threatened to pursue truckers who refused to pay a 6.20 charge all the way to court.

A total of 65 trucks refused to pay the toll at the end of a two-hour demonstration in which hauliers blocked six lanes of the M4 toll plaza at Enfield, Co Meath.

They were allowed through the toll booths after their details were recorded.

Eurolink, the private company which operates the Kilcock-Kinnegad stretch of the new Dublin/Galway/Sligo motorway, said they would all be sent bills for the 6.20 toll.

Antonio de Santiago, Eurolink chief executive officer, said the truckers would be given an opportunity to pay the charge.

However, any truckers who refuse to pay would be pursued through the courts, he warned.

Despite fears of traffic disruption, car drivers sailed through the toll plaza from 7am-9am yesterday as five car lanes were open in each direction.

Eurolink said the disruption had caused a 25pc reduction in the number of vehicles using the road.

Some 24 trucks caught in the blockade did pay the toll, according to the company.

Alan Hendrick, a protesting truck boss with a fleet of 30 vehicles, revealed that he has instructed all his drivers that they would have to pay the toll out of their own pocket if they used the new road.

The company drivers now use the roads network around Enfield to avoid the toll road.

Mr Hendrick said they were not going to pay up to 30 toll fees every day.

John Nestor (62), a truck driver with Green Tiger Express car transporter, said after driving on poor condition roads for 40 years he wanted to end his driving days on affordable roads.

Mr Nestor also complained about the absence of any motorway rest facilities for drivers anywhere along the national motorway network and said that this raised safety issues.

Despite legal requirements for truckers to have a 15-minute break after driving for 45 minutes, there were no such facilities available. "You can drive from Mullingar to Dundalk, 100 miles, and there is no place where you can pull in. We're supposed to stop after 45 minutes for a 15-minute break," said Mr Nestor.

A motley crew ,an election review. 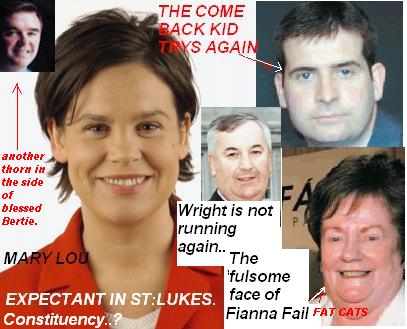 Bertie Ahern is just one of 70 TDs in Dail Eireann making over 100,000, an "Irish Independent" study of TDs' wages shows.

Fianna Fail and the Progressive Democrats entered Government in the summer of 1997. Since then, all politicians have benefited from substantial pay rises through a range of wage increases. The salaries of ministers have gone up from 107,000 to 199,000 (up 87pc) and ministers of state's pay has risen from 73,000 to 137,000 (also up 87pc).

TDs have actually got the largest wage increase over this period. TDs' basic pay was 45,729 in 1997 and that basic rate is now 88,556. This 94pc increase ignores the introduction of bonuses for length of service, so the two figures are not directly comparable.

TDs' pay has doubled since Fianna Fail and the Progressive Democrats came to power.

When all pay, which includes that for ministers, office holders, MEPs etc is added up, the total average spend by the taxpayer on each TD is 115,000.

And that is before they claim for generous expenses and other allowances.

The 'minimum wage' for a TD has doubled to almost 92,000 since 1997 when the new long-service allowance is included.

The startling increase in political remuneration is revealed in the first comprehensive study of the salaries of all 166 TDs carried out by the Irish Independent.

And there will be more hikes before the next election.

The Government is telling workers that double digit pay increases are not on the cards. Yet TDs' wages are now linked to principal officers in the civil service, so they, too, will benefit from the outcome of the next round of "benchmarking" pay talks.

TDs got more wage hikes than any other public sector workers as a result of two special pay reviews.

The salary details are based entirely upon documents released under the Freedom of Information Act from the Houses of the Oireachtas and figures from the Department of Finance.

Office holders, members of the Houses of the Oireachtas Commission and party whips all get additional sums.

The salary increases over the past nine years have come from the Partnership 2000 national wage deal, Programme for Prosperity and Fairness wage deal, Sustaining Progress wage deal, Public Service Benchmarking Body, and the Review Body on Higher Remuneration in the Public Sector.

TDs are the only public sector workers to benefit from the pay review process for top civil servants and benchmarking, as well as partnership agreements.

In industrial relations circles this has been described as a 'double whammy'.

No other public sector group was ever allowed to benefit from these two special pay reports, which were separate.

Aside from the basic pay, there have also been substantial hikes in allowances, travel expenses, office grants, pension, gratuity and severance payments.

The pay increases are defended by both Government and opposition parties who point to the long hours of work put in by politicians.

Finance Minister Brian Cowen says; "We do not set their own pay rates, as it is an independent process"!.

Shrewd Celtic Tigers,Friends of Fianna Fail, ( and maybe a few T.D,s) disenchanted with spiralling house prices at home, are broadening their property portfolio, and heading for the desert kingdom of Dubai.!

Almost 800 Irish investors, looking for a slice of the celebrity life, attended exhibitions for Dubai Sports City at Jury's Hotel in Ballsbridge, Dublin over the past two weekends.

Already 265 luxury apartments have been sold, with the remaining properties expected to be snapped up before the end of the month.

Irish buyers will be hoping to pick up golfing tips from their heroes Tiger Woods and Ernie Els who have both bought properties in the development. Tennis sisters Venus and Serena Williams have also decided to shell out for luxury penthouses.

"We have almost sold out but there are some apartments left. We have been surprised by the amount of people who have been to Dubai in the last six months and are now interested in buying property there." Studio apartments at the five star development start from 80,000 while villas are going for up to 1.5m. All are decked out in marble and the latest luxury fixtures and fittings.

But many of those shelling out for a place in the sun will never set foot on their new property when it is completed in two years time.

"The type of investor we are seeing are doing it totally for the rental and capital appreciation. Only about 20pc will go out themselves from time to time," explained Mr Norton.

But those that do venture over can revel in year-round sunshine, miles of beaches and tax-free shopping.

Some 70,000 people are expected to live and work in the groundbreaking development and its facilities - including a championship golf course and four major sporting stadiums - will attract millions of sports fans from all over the world annually. 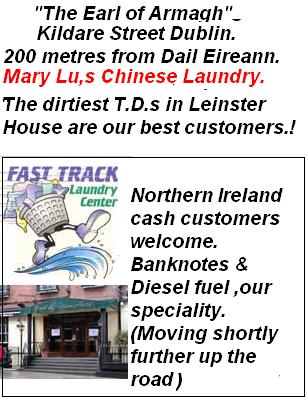 The weeding out of another "threat to the state" (The one south of the border..)

Mr Pat Lenaghan,a businessman from border country believes that Garda press leaks,indicating his hotel the Earl of Kildare" was a nest of I.R.A. spies,and linking his name to the robbery in which the IRA stole stg£26m in Belfast is "part of a wider political and commercial agenda".

Mr Lenaghan is also known to be involved in the development of tracts of land in counties Meath and Louth. One tract of land is currently under development and when finished is expected to have a gross value in the region of 60m.

Detectives have said they could not put an overall price on the Lenaghan portfolio, but it is well in excess of 100m. The south Dublin pub alone - the Sarah Curran - which was bought for 500,000 in 1991, has major development potential and is probably worth well over 20m, gardai estimate.

He has received business advice from former Sinn Fein/I.R.A. vice-president turned banker, Phil Flynn, one of Bertie Aherns top advisers, who was at the centre of an earlier money laundering probe, after which he resigned as chairman of Bank of Scotland Ireland.

If the education budget goes on teachers wages how can you build new schools.?

By Seán ORiordan (the Examiner)
ANGRY parents and board of management members staged a protest in June 2006 at which they accused the Minister for Education of failing to live up to her promises.

They gathered outside Clonakilty Community College, in Co Cork, to highlight concerns about overcrowding. They were also protesting that a design team for an extension still hadnt been appointed, despite the fact the minister, Mary Hanafin, approved the move in April 2002.

Robert Walsh, a VEC representative on the local town council, said the present situation presented dangers for pupils and was affecting their morale and that of their teachers.

"The minister gave verbal assurances, but the situation remains the same. Classes are being conducted in the assembly area. Meanwhile, students have to travel over half a mile to the old technical school to be taught some subjects," Mr Walsh said.

The only move by the Department of Education was to last month send an inspector to assess the situation, he added.

"It is so long since the original commitment was given for a 1,600 square metre extension that the department has now agreed to up it to 1,900 square metres," Mr Walsh added.

Deputy Jim OKeeffe (FG) said Ms Hanafin added insult to injury in bypassing the college yesterday, as she was in nearby Inchydoney for a function.

"It is now over four years since the last election, when the infamous promise was made," Mr OKeeffe said.

The school is being considered as part of the School Building and Modernisation Programme 2006-2010.

"Its ironic that Minister Hanafin was in Inchydoney yesterday as it was where the Government famously decided on a more caring policy.

"It just shows how out of touch they still are."