The bertie butterflies  (fianna Fail T.D.,s)  emerges from their chrysalis/pupae in Kildare st.for another five years... 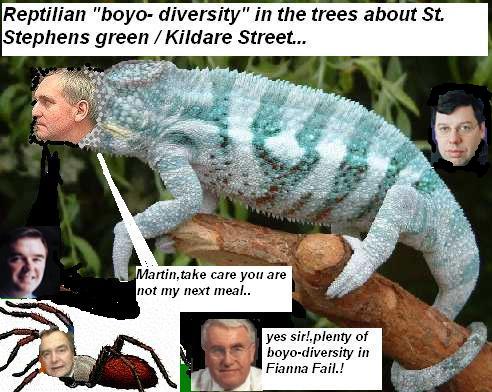 Newspaper report 2005;"Following the formal launch of the Interim Review of the National Biodiversity Plan, Minister,Dick Roche will proceed to assist in the installation of bird feeding stations in the grounds of the Custom House and he announced proposals for the inclusion of a wildlife area in the grounds next Spring to attract birds and insects."(no joke-this was a real press release.!)

The Minister hopes that other Government Departments and State agencies will undertake similar biodiversity-friendly initiatives in their own grounds over time. A colony of vampire bats in Leinster house have already been awarded protected species status.

When I fall in love-it will be completely. 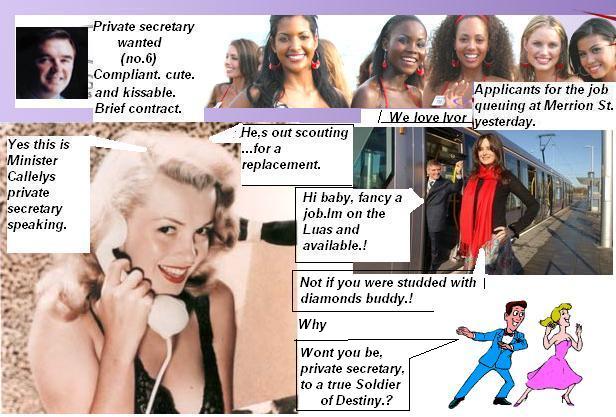 A special new cocktail from C.R.H. Des Traynor and C.J.H. 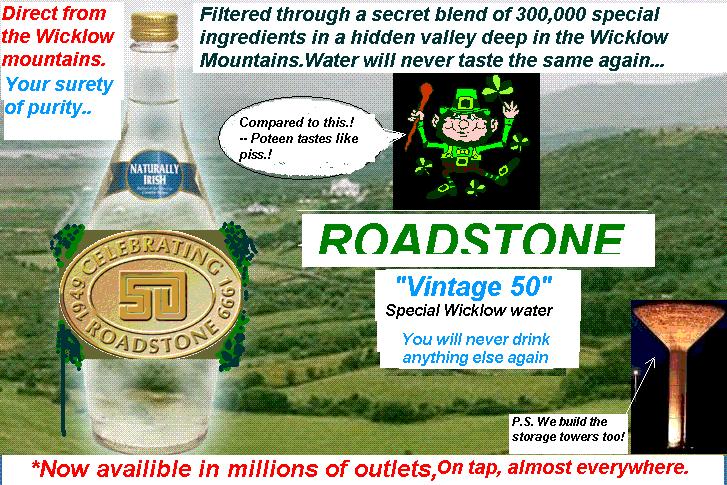 NONE of the private water schemes supplying drinking water to Irish households meet minimum standards, according to the Environmental Protection Agency (EPA),December 2005.

A report also found that just under 20pc of all water supplies in the country were contaminated with E.coli at least once during 2004.

'The Quality of Drinking Water in Ireland' reported that 7pc of the population is supplied by private schemes, none of which are deemed to be "satisfactory".

More than 20pc of these contained an unacceptably high level of the potentially fatal bug, E.coli.

Public schemes in four counties - Sligo, Kerry, Donegal and Leitrim - were also found to have traces of E.coli on more than one occasion.

"As such its (E.coli) presence in drinking water is a good indication that either the source of the water has become contaminated or that the treatment process at the water treatment plant is not operating adequately," the report stated. 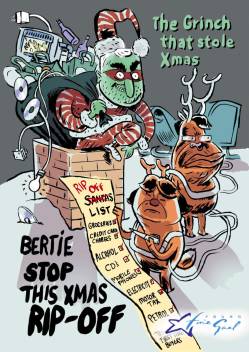 Lets have some cheap T shirts and sweaters from Penny,s overprinted.!

The Government was forced to back down  from attempts to railroad through the legislation allowing for massive fines and confiscation of boats for fishing offences. The combined efforts of opposition parties and FF TDs caused the debate on the issue to be extended beyond Christmas. Fianna Fail TDs from coastal constituencies are in revolt over the new laws that are being vehemently opposed by fishermen. Fine Gael.who also oppose the bill, threatened yesterday to force every Fianna Fail TD to vote on the bill and obstruct efforts to pass the legislation before Christmas.

Meanwhile, a new crackdown to halt the "catastrophic" collapse of cod stocks off Irish waters must start at once, warned the European Commission. But the gloomy report was attacked as pointless by Irish fishing interests afterwards. Announcing its planned fishing quotas for the coming year, the European Commission demanded further deep cuts in both the Irish Sea and off Scotland's west coast. Both areas face 15pc catch cuts, on top of deep reductions for the past few years. For years, scientific experts have warned that if drastic measures aren't taken, then many fish species will become extinct. Last night, the commission's senior official dealing with fisheries controls said that without the special conservation measures, the future but get even worse. The situation was 'catastrophic', said Ernesto Penas.Irish fishermen have been ignoring the laws and quotas for years,and now both political parties refuse to consider punitive measures requested by the E.U.

And now the for the "Tour-de-Force, Massive overfishing, by a  number of Irish "Supertrawlers" based in Killybegs and Castletownbere.

These boats were recently catching five times the Irish national quota of Mackerel,for example,with complete immunity,from any punishment, thanks to Fianna Fail,s indifference to the plunder of our national fisheries. The EU Committee for Common Fisheries Policy recently introduced a Bill, known as The Sea-Fisheries and Marine Jurisdiction Bill 2005, which all EU Member States were required to bring before their parliament. This bill is described as a long overdue piece of legislation designed to modernise EU laws, including of course Irish law, and to bring it into line with the new EU regulatory system.

It was pointed out that the need for such a bill was emphasised by two Supreme Court cases which exposed loopholes in the existing law and showed how hard it was to deal with the problem of illegal fishing.

It was against this background that this new bill was drafted and published early October with the Dáil debate on the bill timed to take place on Thursday, October 13. However, on the night before it was due to be debated in the Dáil, this very important piece of EU legislation to protect the future of Irish fish stocks was pulled by the Government.

The reason for this was because our local representative in the Dáil, Bantry-based Deputy Denis ODonovan, said that he would defy the Government whip and vote against this new bill.

Although Deputy ODonovan has the backing of a few other Fianna Fáil backbenchers, as well as Fine Gaels John Perry and Tommy Broughan, the Labour Party spokesman on Marine, it is common knowledge in fishing circles that these objections to the bill come from a powerful small number of the large super trawlers.

The decision to pull the bill had now left the Irish fishing grounds open to overfishing by native and foreign factory trawlers and has exposed the Irish taxpayer to massive EU fines.

"That the Government abandoned its plans to protect the national interest and instead capitulated to a small vested interest group of wealthy trawler owners, backed by a handful of Fianna Fáil TDs, is a salutary tale about the way the clientelism in Irish politics works against the common good."

The European Common Fisheries Committee is already involved in seven European Court cases against Ireland in respect of alleged overfishing or inadequate control and enforcement over the past ten years. Its rather amusing to find that both the Fine Gael and Labour parties are colluding with the Government against the interests of the Irish taxpayer, not to mention the environmental destruction involved. Oddly,while Deputy ODonovan opposes this bill to restrict overfishing, he agrees with the salmon anglers that a bill should be drafted which curtails drift net fishermen.

A FAILURE to hire enough fisheries staff left Ireland with another embarrassing defeat in the European Courts December 2005.

The Court backed the complaint from the European Commission that Ireland hadn't been able to provide adequate statistical data on fisheries catches for two years, in 1999 and 2000, In its defence, the Department of Marine offered mitigating circumstances, explaining that it didn't have enough personnel at the time and that its computer system wasn't able to provide some of the complex information it should have done. But neither argument impressed the 25-judge court, which ordered Ireland to pay costs.

While irish fishermen have been a law unto themselves for decades.ignoring every rule on catch limitation,and virtually wiping out Cod species in Irish waters,Mr Joe Walsh T.D. has called for a new Sea Fisheries and Maritime Jurisdiction Bill to be amended and to decriminalise the majority of fishery offences so that only very serious fishery infringements should attract criminal proceedings, Mr.Joe Walsh T.D. said that the punishment should fit the offence. Pointing out that as it stood the provisions of the Bill were contrary to the European system of dealing with fisheries offences where 86% of them are dealt with "administratively" !, Mr. Walsh said he understood that the EU Commission favoured administrative sanctions over criminal proceedings.

Mr. Walsh concluded by saying, "Speaking to fishermen, I know that they are in the depths of despair, they are struggling financially and now they see this Bill as the final nail in the Regulations for the Industry, but we, as Legislators, cannot preside over draconian measures."

The tail wagging the dog,(both dogs) as always... 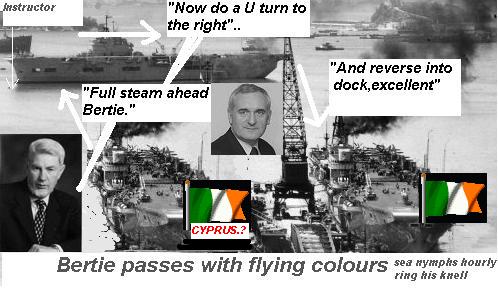 Let the dead bury the dead. 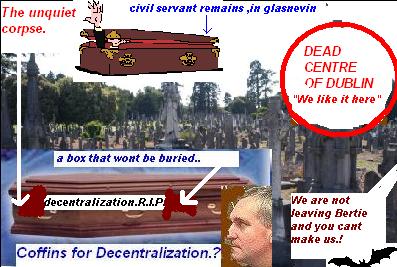