The last of the wild salmon in Castletownbere. 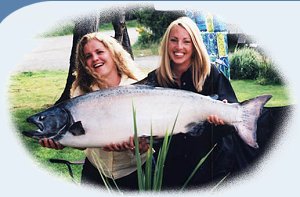 Left,Monica throwing shapes at Joe Duffy in the Four Goldmines.

PR CONSULTANT Monica Leech is sued RTE for libel after comments made by a caller on the Joe Duffy Show.The case began in the High Court in November 2005

Ms Leech, who earned more than 300,000 for her work as a communications advisor to Environment Minister Martin Cullen, heard the 'Liveline' broadcast on her car radio in December last year.

The PR consultant, who recently became CEO of Waterford Chamber of Commerce, claims she heard the broadcast live while driving in her car and was extremely shocked, distraught and shaken.

It is claimed that in November and December 2004, Ms Leech, a self-employed communications consultant, of Otteran Place, South Parade, Waterford, was the subject of prominent and sustained media coverage by RTE and other media organisations.

Monica Leech, you we beseech,

Joe Duffy not to pur-sue.

He's a decent old chap, but his programme went "zap"

when the comments got seedy and blue.!"

Oh how they suck,-bad cess and bad luck,

-to each Soldier of Destiny .!

Cockups from Cullen are never for free!

The media is muffled so your feathers aint ruffled,

Corruption and graft  all around us we see.

When off to the high court they flee.!

So Monica Leech, you we beseech,

Dont be such a greedy old sow.

Today a number of new amendments specifically targeting errant "Soldiers of Destiny" like Martin Cullen, have been added to the current Fianna Fail list of 69 odd driving offences,listed on the new Road Traffic Bill-all of which attract penalty points,(should the computerized system which compiles  records ever swing into action.!) Mr Ahern, has announced that ministers who violate them will then be punished. A severe "rap on the knuckles" awaits wrongdoers," nobody is above the law, in Fianna Fail" said Bertie.

(1)New Violation; Lighting up another cigarette, while your vehicle is in motion.

(Offence; Observed driving with one hand on the steering wheel )

(2)New Violation; Dropping the hand while a beautiful P.R. consultant is in the front passenger seat.

(Offence; observed,with one hand in an inappropriate place, and not in full control of a moving vehicle)

(3)New Violation; Passing out, on the M 50, and other arterial routes near Dublin.

(5)New Violation; Unsafe sex,with a P.R. consultant, in the rear seat of a government vehicle.

(Offence; An inappropriate cockup, in a government vehicle )

(Offence;Transporting excess E-voting junk,computers,etc. to the dump, without a waste disposal permit)

(7)Violation; Refusing to stop, when requested to do so.

(Offence; Going too far with cronyism & Monica. Wasting a fortune in taxpayers money.

(8) Violation;Writing notes on cigarette packets while stopped at traffic lights

(Offence;Costing the new national infrastructure and transport plans, while in charge of a vehicle)

(9)Violation; Daydreaming while driving a vehicle.

Offence; Driving outside the Republic of Donegal without a certificate of sobriety.

(11)Violation; Seriously injuring pedestrians while comatose drunk,and in charge of a murder machine.

"Fianna Fail Ferries."-no room on the "Bertie Boat" , for the old, the abused, or the dying..

A government tax rich as never before,Fianna Fail hurt the old, the sick, the abused ,and the dying,-like never before.

One in five irish women are abused in their intimate relationships, the shocking reality of overcrowding in the refuges where women look for shelter results in the constant refusal of admission,to the majority of victims due to lack of space..

There are just 24 family spaces available in three refuges (Rathmines, Coolock and Bray) in the greater Dublin area.

Hundreds of terminally ill cancer sufferers are dying without dignity or comfort in public wards in Dublin and countrywide due to the lack of fundung for Hospice care.

There are two Hospices in Dublin,one in Raheny with 15 places,and a second in Harolds Cross with a maximum of twenty beds,and much of the funding for these is raised privately through the generousity off ordinary overtaxed private citizens.

The line, manned by well paid Fianna Fail supporters, is intended to provide a contact point for other organisations providing comfort, succour,and councilling for crime victims around the country.

Funding for the groups is determined by a special commission (Berties cronies) and headed by former assistant Garda commissioner,Jim McHugh.

More than 60 applications for funding have been received and so far 24 have been approved with another 16 in the pipeline.

A network of good samaritans across the country will attempt to alleviate the pain and loss, and assuage the anger felt by victims. Chat lines will listen sympathetically to the harrowing stories of families left bereaved: drunken drivers,and T.D,s receiving suspended sentences and derisory fines(McDaid, Wright,etc); witnesses of harrowing murders living in fear and refusing to testify,etc. etc.

Mr McDowell said there was a great tradition of volunteering in this country and he paid tribute to the work done in the different areas of need.

He agreed that criminality is widespread and endemic on the Island of Ireland. " Corruption, thieving, robberies, rapes, murders,and drug related offences are out of control,and that there is little the Gardai can do to prevent it." he remarked.

"They are part of the problem"!

"My own associates in the legal profession have made a few bob recently investigating these matters,but even if you locked up the whole Cabinet and every crooked Fianna Fail T.D. in the country,it would hardly put a dent in it",he added.

"Fine Gael and Labour would be just more of the same, however you know you can trust Mary,myself and the rest of the P.D.s so give us your vote and we will keep our eye on whichever Mafia is elected..!",he announced

All things are possible in Mayo.!

Local councillors walking on water-and building one off houses too.!

Members of the Belmullet area committee of Mayo County Council have expressed a certain amount of annoyance and dismay that housing developments are being turned down on the basis of trial holes. The matter came before a meeting in Bemullet last week(November 2005) when the members were told that an application in the name of Michael Conmy, Tullylinn, Culleens, Co. Sligo, for a house and septic tank and treatment unit, at Kilcommon, Pullathomas, was recommended for refusal. The Planner told the meeting it was recommended for refusal because the high level of ground water on the site made it unsuitable for the safe disposal of effluent and as a result the development would be prejudicial to public health. Cllr Gerry Coyle said he was amazed that in the year 2005 they were still refusing applications on trial holes. The technology was there to do nearly anything and yet they could not safely dispose of effluent from a tank. I am amazed, simply amazed at this. What I see here is that someone wants to build a house in Pullathomas and they cant do it, he said. Cllr Michael McNamara suggested that perhaps they could ask their engineers if they could come up with a solution to the problem and that would make it easier for people to build houses in areas were there was water. Cllr Tim Quinn said the engineers should be invited to a meeting to tell them what the solution would be to such a problem. It was very disappointing for a young couple, who perhaps got a site from parents, to be turned down because of ground water. Mr. Padraig Brogan, S.S.O. said there was a planning clinic every week and it was a free service for the public. People should attend these and difficulties could be flagged before they became big problems.

A fugitive from furious farmers.? 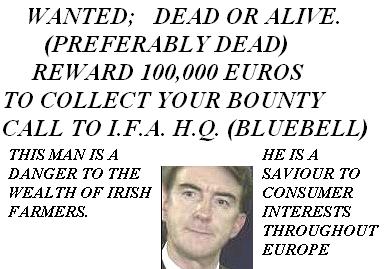