Planning officers are  accused of  "heinous indifference,and adopting a policy of eviction"

Members of the Castlebar area county council committee will consider tabling motions directing the county manager to grant planning permissions if there is not a change of heart on the part of planners in relation to rural housing. The warning was sounded at a meeting in Castlebar when planners advised members they were recommending an application by Enda Murphy, Oughterard, Parke, for refusal. They were recommending refusal on the basis that the proposed house would be obtrusive on the landscape and because they were not satisfied that the effluent treatment system was suitable for the safe disposal of effluent. Cllr Al McDonnell expressed his "grave disappointment" at the recommendation. "There is no genuine reason for this refusal," he said. "It goes against the objective set out in the County Development Plan to generate rural renewal.

"This man has nowhere to go. He wants to live on his own land and it is totally wrong that he should be refused." Cllr Henry Kenny said he knew the family in question and he would have thought, in view of the new guidelines relating to rural housing, that the application would be recommended for granting. "Surely we are amenable to allowing people build on their own land. This is a form of eviction. This man will be forced out of his own area if this is refused," he said. Mr Ray Norton, Director of Services, said the issue was the site, not the type of building. He had suggested that they consider moving to another site. They had other land but the site selected was the most obtrusive.

"I would love to grant this but if I did I would be open to being accused of doing something I would not do for some other applicant," he said. "I met these people on four occasions and we have done as much as we can to help them." Mayor Blackie Gavin said the case was not an isolated one. There seemed to be an awful lot of such cases in rural areas and it was outrageous that young couples could not build on their own land. "It is not good enough. We must start directing the manager to grant permission if this continues. There is a lot of pressure on young couples without forcing them to leave their area if they want to build a home, he said. Mr Norton said the planners did not refuse permissions just to be awkward. They did so only when there was valid grounds. "There are very few refusals, in fact," he commented. 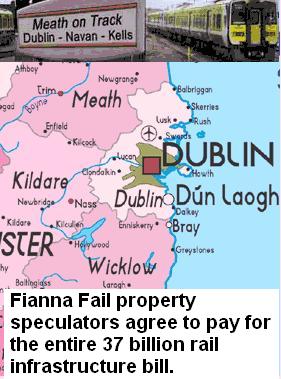 Brendan Hickey managing director of Davy Hickey Properties, Jim Mansfield of Citywest Hotel and Conference Centre, and Pat Doherty's Harcourt Developments all separately confirmed yesterday that they would save the taxpayer 37 billion Euros and pay for an integrated rail system,not only in Tallagh,but throughout the entire province of Leinster.

"We also own thousands of acres of land around the towns of Navan ,Drogheda,Kildare,and county Dublin" They declared yesterday.."If Bertie gives us the go ahead to build new housing estates everywhere,we will pick up the train tab-and more importantly we will build the railways quickly and efficiently (because it's our money.!)"

"This will enable Martin Cullen to cancel his pet road building projects through Tara, and eliminate bad feeling with the Heritage headbangers.Furthermore the money allocated for new highways can be given to the St Vincent De Paul society to assist the urban poor, in their voting preferences,during the Fianna Fail re-election campaign."It's a win win situation for everybody" they declared.

The Fianna Fail Cabinet have given a guarded welcome to the philanthropists offer.T.D. Joe Higgins said he would prefer if their obscene wealth was confiscated, and their tax exempt status was reviewed by the Revenue commissioners.!

According to An Taisce;  The new inter city roads designed for strategic inter regional travel ,are being increasingly clogged by commuters travelling from longer distance  to places of work with resulting adverse social and economic impacts, as well as generation of additions congestion and greenhouse gases. New development around all of Irish cities and towns needs to be linked to public transport provision and  accessibility as recommended in the National Spatial Strategy. This is not happening and the plan makes no provision to make it happen.  There is no evidence to establish that existing and proposed additional public transport measures will either be in place in time, or be adequate. 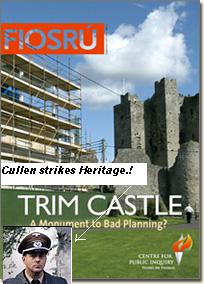 The rape of Lough Key.A Fianna Fail project in association with "Coillte" 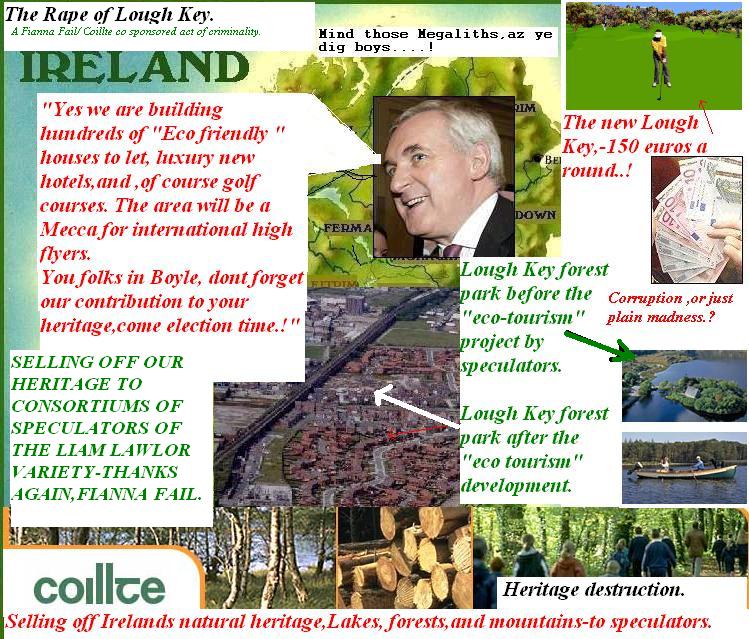 Danish investment still welcome,north and south of the border.! 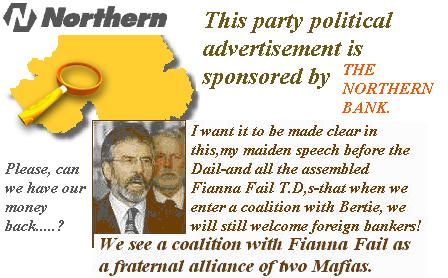 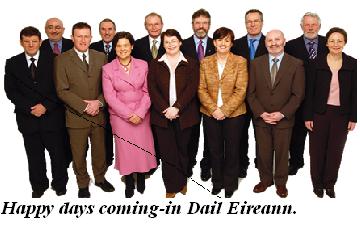 MORE workers are paying tax at the higher rate than ever before.

Ireland is now "probably the only country in the world" where such a high proportion of the workforce is paying the top rate tax of 42pc, the Labour party said.

The party's finance spokeswoman Joan Burton said it was the "central injustice" of the Irish tax system that one-third of taxpayers were paying the top rate on modest incomes.

Millionaires were able to arrange their affairs to avoid paying any tax at all, she said.

This was despite a Government commitment to the electorate and the social partners to take 80pc of taxpayers out of the top rate.

INJUSTICE ; These political vultures,prey upon the lower paid.

A single person now only had to be earning 33,000 a year to be dragged onto the top rate, which most countries only reserved for their super-earners, she said.

And the "top rate" is one of  the lowest in the world-for top earners.!

Despite a Government commitment of many years to reduce the proportion paying top rate to one taxpayer in five, it now amounted to one in three, Ms Burton complained.

Failing to index bands or increase allowances during the current Government had amounted to a "smash and grab raid" on PAYE taxpayers, Labour said.

"The last three budgets have been characterised by the greatest stealth tax of all on PAYE workers through the refusal of the Minister for Finance and his predecessor to index the standard rate band," she added.

The effect of this was to drag the majority of those who pay tax into higher rate bands.

A single worker earning 33,000, just about the average industrial wage, would pay tax at 42pc on overtime earnings or bonus payments.

"Contrast this with the continuing scandal of some millionaires who pay no tax by availing of the plethora of tax breaks available.

"Once again, we see that this Government has failed miserably to honour its commitments to the Irish people on critical tax and public spending issues," she said.

Pigs,thatched cottages ,and "part of what we are"

A mere 2,000 buildings with thatched roofs survive across the country, according to a report published today.

Minister for the Environment, Heritage and Local Government, Dick Roche warned,in November 2005 that the thatched roof, an archetypal symbol of rural Ireland, was "all too fast" coming under threat.

"We must find ways to ensure the survival of this building form, seen nationally and internationally as being part of what we are," he said.(?)

The Present and Future Protection of Thatched Structures in Ireland report notes there are only 2,000 left in the whole country. It also highlights the loss of thatched roofs in Northern Ireland, from some 40,000 in the 1950s, to 150 today.

There has long been concern about the decline of thatch in Ireland and, despite the efforts of many different agencies, thatch is still being lost.

The report says there are many reasons for this, including the fragmented nature of the thatching trade, a widespread lack of detailed knowledge of thatch materials and techniques as well as a need for policy integration.

The report also includes useful data for owners of thatched buildings, their professional advisers and the building industry, including a list of thatchers, suppliers of thatching materials and insurers for thatched houses.

"I will be sending copies to all the relevant stakeholders and hope it will finalise an approach on how we implement the actions necessary to save our surviving stock of thatched buildings," said Mr Roche.So the pigs in the parlour cottages will receive more subsidies to retain our "Pig in the parlour" image.     http://www.soldiersofdestiny.org/therapeofloughkey.htm

Coillte, the agency which sells your heritage to "Friends of Fianna Fail"!

Martin Cowan jumped over the moon.

The Rabbites laughed to see such a sight,

And Jerry Adams ran away with the spoon. 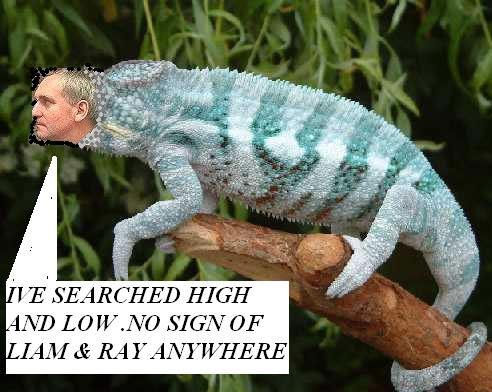